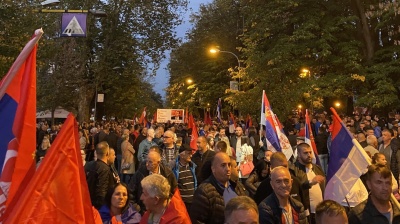 Tens of thousands of people turned out for the mass rally in Banja Luka. / SNSD
By Denitsa Koseva in Sofia October 25, 2022

Nearly 30,000 people gathered at a nationalist rally in Bosnia & Herzegovina’s Republika Srpska where Milorad Dodik, the leader of the SNSD party, promised that secession will happen for the Bosnian Serb entity.

Dodik, current member of the state-level tripartite presidency and the likely winner of the race to become Republika Srpska’s next president, has been pushing for secession of the entity from Bosnia for years.

“We promise you, we shall go for sure, and one day we shall take 49% of Bosnia & Herzegovina with us. And when is that? I believe in the ideals of an autonomous and independent Republika Srpska. They cannot prohibit us,” Dodik said during the rally as quoted by N1.

He repeated his plan, announced a day before, for the formation of a central election body in Republika Srpska that would count votes during elections instead of the state-level institution. This idea, if implemented, would violate the Dayton peace agreement that put an end to the bloody 1992-1995 Bosnian war.

However, Dodik claims that the original Dayton accord is not being respected and insists on implementation of its original version, which, according to him, gives more independence to the two entities.

“Give us back the constitution of Bosnia & Herzegovina or we shall leave,” he said.

Dodik says the country should return to the “original Dayton Peace Agreement”, annulling all the reforms implemented over the years which include a single market in the country, a single currency, single military, border police and other state-level institutions, including the judiciary.

During the “Fatherland Calling” rally, held in Republika Srpska’s administrative centre, Banja Luka, a proclamation by the “Great Assembly of the People of Republika Sspska” was published, saying that the entity will not accept "anti-Dayton and anti-constitutional Bosnia and Herzegovina", nor a Bosnia & Herzegovina which is only ruled as desired by the Bosniak people.

“The Republika Srpska [entity] was founded by the people on January 9, 1992, it was defended by the people and its Army of the RS during the ‘Defence-Patriotic War’ and we have preserved it for all these 27 years of peace … Give us back the constitution of Bosnia & Herzegovina so that we do nt have to leave it,” states the proclamation.

The assembly, which has not been recognised by any institution on the state level or in the Federation, claims that the state-level constitutional court has taken decisions that “seize the agricultural land, forests and waters from the RS, take away schools and hospitals, roads and dams.”