Doctors deny Navalny poisoned, but refuse to let him leave 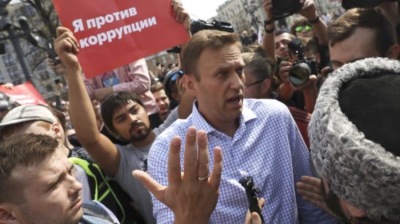 Navalny is in a coma in a Siberian hospital after he was allegedly poisoned. / wiki
By Ben Aris in Berlin August 21, 2020

Doctors in Omsk made a number of conflicting comments that have only added weight to suspicions they want to delay anti-corruption blogger and opposition activist Alexei Navalny's release from hospital for a few days, after which time the toxic agent in his body will have dispersed and be undetectable.

Navalny was on a flight home to Moscow when he became seriously ill and collapsed. The plane made an emergency stop in Omsk where Navalny went into a coma. His team claim someone put poison in his tea that morning.

A very well-equipped German hospital plane arrived from Berlin in the morning of August 20 and was standing on the tarmac in Omsk waiting to take Navalny back for treatment. But the doctors refused to allow Navalny to be moved at first, as they claimed he was “too unstable”.

Then, under pressure from Navalny’s team and his wife Yulia, who arrived from Moscow at midday the preceding day, the doctors claimed he could not be loaded on the German plane, as he was afflicted by such a lethal agent that everyone that comes into contact with him is in danger, but they refused to name the agent.

By mid-afternoon the head doctor finally made a statement, saying that there was “no sign of a toxin”.

"No poisons or traces of poison have been found in his system. I suppose the diagnosis "poisoning" is still at the back of our minds. But we do not think that the patient has been poisoned," Anatoly Kalinichenko, deputy chief physician of Omsk Emergency Hospital No. 1, told reporters.

The most likely cause for his collapse was a “metabolic disorder, possibly caused by a sharp drop in blood sugar levels.” Reluctant to face Navalny’s friends and family, Omsk hospital head physician Alexander Murakhovsky made these comments via a short video address and not in person.

Navalny said himself that he suffered from diabetes in 2019, giving some credence to this explanation.

“The diagnosis, to which we are now most inclined, is a violation of the carbohydrate balance, that is, a metabolic disorder. This may be caused by a sharp drop in blood sugar, which caused a loss of consciousness,” Murakhovsky said in the video clip.

The German medical specialists who arrived in Omsk will examine Navalny’s condition, Murakhovsky said, and added that the health workers were now trying to resuscitate Navalny and get him out of the coma.

Officially the Kremlin says there are “no obstacles” to transporting Navalny to Berlin for treatment, but emphasised the doctors in Omsk have the final say.

"This is a matter of an exclusively medical decision. There are probably some formal procedures to be complied with, I know nothing about these formalities. However, no one sees any obstacles in this case, except for… the attending physician’s decision who is responsible for the patient’s health," Russian presidential spokesman Dmitry Peskov said.

He stressed that the Kremlin was unaware of any instructions or orders prohibiting Navalny’s transportation. "No, the Kremlin knows nothing about that," Peskov said answering a question on the issue.

Stoking speculation that the Kremlin is more involved in the case than it admits, Navalny’s press secretary Kira Yarmush reported that three men in suits had taken over the head doctor’s office in the hospital who are “either from the FSB or the investigations committee. There are no doctors in the office,” she noted.

While Russian state TV has been following the street protests in Minsk closely and largely playing the story straight, it has been almost totally silent on Navalny’s medical drama unfolding in Siberia.

The headlines on August 21 included: Russia remains world leader in atomic energy; endangered leopards are reintroduced to the national park in the North Caucasus; and Russia is seeing an uptick in poisonous snakes. The Navalny story was completely ignored.