It’s reporting season and some Russian companies are paying handsome dividends to their shareholders. Almost twice as much as emerging-market peers, in fact, relative to their stock prices, after the sudden ruble rout of last year bolstered exporters’ cash piles.

Russian stocks have been performing well off the extremely low base caused by rapid devaluation of the ruble in December: the dollar-denominated RTS index was up 30% year-to-date as of May 6. But dividend stocks have become even more appealing than the broader market and were the stand-out winner amongst Russian equities over the last few years, earning far better returns than "normal" stocks.

The average 12-month dividend yield of stocks (the ratio of the value of the dividend per share over the price of the stock) on the MSCI Russia Index was 4.6% as of the end of April, compared with 2.5% for equities in the developing-nation benchmark. The spread between the two is almost as high as the previous peak in 1995, data compiled by Bloomberg shows.

"The first-quarter numbers point to a very moderate recession, which is probably now largely built into earnings forecasts. In that case, equities are still very cheap relative to emerging market peers," says Chris Weafer, CEO of Macro Advisor. "Companies paying a dividend yield of 6% or higher should see good support from income-focused investors. There is a question mark over how much dividends will be cut this year. A small cut will provide another boost for the market."

Metals and minerals mine the rewards

Several factors combine to push up the dividend payments, the most important of which is the huge cash windfall for some companies thanks to the beneficial effects of the massive ruble devaluation in December: any company with costs in rubles but revenues in dollars or euros is minting it right now. In 1999, following the last big devaluation, it was the oil companies that made the most. This time round, any profits from oil over $27 per barrel accrue to the government rather than the extracting companies. However, producers of other raw materials like metals and minerals are reporting record earnings in the first quarter and some of them are returning it to shareholders as dividends or share buy backs.

At the end of 2014, steel mill Novolipetsk Steel (NLMK) had $1.2bn of cash, while Severstal had $1.9bn. NLMK just announced a new dividend policy under which it will pay half of net profit or 50% of free cash flow as dividends if net debt/EBITDA ratio at the end of each quarter does not exceed 1, the company said on April 24. The company will pay RUB1.64, making a dividend yield of 4.7%, but if nothing changes with the new dividend policy they could rise to 7.3% this year, say analysts.

"Together with interim dividends the total payout for 2014 will amount to RUB14.6bn ($292mn), or to 30.7% of the company’s net profit, which is the biggest ruble-denominated dividends in NLMK’s history," analysts at Uralsib said in a note.

Severstal is being less generous to its shareholders and will pay out a dividend of RUB12.81 per share, equivalent to a 2% dividend yield. Still, the company will part with RUB10.4bn ($208mn) as a result, which is a bit less than half its EBITDA of $585mn for the first quarter, but equivalent to almost all the company's free cash flow. "It means the company is committed to distributing as much cash as possible to shareholders, while future dividend flow is subject to external economic factors," says Irina Lapshina, an analyst at Sberbank CIB.

Most generous of all is Norilsk Nickel, which earned $2.8bn in cash as of the end of 2014, and said in April it will pay out RUB670 per share, or a dividend yield of 7%, and a total of just over $2bn for the first quarter.

"Since the shareholder agreement was adopted, the company has distributed more than $6bn in dividends," says Lapshina. "Although one might expect to see no special dividends for 2015 (stipulated as the difference between $6bn and total dividends paid for 2013-14), we believe the track record shows that Norilsk Nickel’s approach is flexible, the payout being skewed toward the upside and depending on cash flow generation."

Secondly, the attitude to dividend payments in Russia has changed dramatically in the last few years. In the 1990s oligarchs ran their companies personally and made sure the profits went directly into their own pockets, but after two decades at the top, the biggest businessmen have stepped back and handed over the reins to professional managers. At the same time, the oligarchs have increasingly diversified their wealth by investing into non-core businesses and buying more companies overseas in the last few years. As the distance between the wealth and the boardroom increases, these businessmen are increasingly interested in extracting cash via dividends rather than using the transfer pricing schemes of yore, which piled up money as nominal profits in some trading company in an offshore haven.

Russia's leading electronics retailer M Video is a good example of a modern company interested in keeping shareholders happy. At a board meeting at the end of April, the board agreed to pay out dividends of RUB27 per share, or a total of RUB4.85bn ($97mn), which is equivalent to 60% of its net IFRS profits. The payout will be a third (35%) more than the company returned to shareholders in 2013 despite the worsening economic outlook.

The increasingly cash-strapped state has also become interested in dividends and a few years ago mandated that all state-owned enterprises must pay out 25% of their profits to shareholders. The government needs the extra cash, but the rule has benefited minority shareholders too.

State-owned gas monopolist Gazprom was coining it in the last quarter of 2014 as gas prices began to recover, but mainly because the company dramatically slashed its capex programme. "In 2014, Gazprom generated its highest free cash flow ever, at almost $17bn ($5.9bn of that in the fourth quarter of 2014). A large reason for that was an $11bn drop in capital expenditures to just $33bn (although attributable capex was almost unchanged y-o-y in ruble terms)," Sberbank CIB analysts commented in a note.

The company has recommended a payout of RUB7.2 per share, equivalent to a dividend yield of healthy 5%, which is equivalent to 90% of its 2014 profit under Russian accounting standards, more than the RUB5 analysts were expecting the company to pay. While on the face of it this seems like a lot, because Gazprom is calculating the profit using the Russian accounting system, the profit is several times lower than if it were calculated under the International Financial Reporting System (IFRS).

"The declared dividend comes to just a 15% payout of 2014 consolidated IFRS earnings (adjusted for forex loss, net of tax accrual) – about the same payout as last year," CIB’s Alex Fak said in a note on the news.

Most companies that regularly pay out dividends have struck a more cautious course. Revenues at leading mobile phone company Megafon fell by 1.2% and it decided to split its 2015 dividend payments, with the bulk being paid close to the end of the year. In June, the company will only pay out RUB16.13 per share, or a 1.8% yield, and total payment of RUB10bn. However, the full year could see the company pay out a total of RUB40bn by year-end, with a generous yield of 7.4%. Megafon said it adopted this approach because it wants to husband its hard currency reserves in case the economic situation deteriorates.

The story is similar at fertiliser producer PhosAgro, which has been generous in the past but cut dividends to RUB15 per share (0.8% yield) after taking extremely heavy losses because of its exposure to hard currency debt during the devaluation (although if you count the RUB 45/share in interim dividend payments for 2014 the total rises to 3.2%, says the company)."

Unfortunately for investors, analysts say the dividend bonanza will not last for long. Companies are paying out cash to shareholders so they can move it offshore or to attract investors, but the slowing economy and rising ruble will soon undo the conditions that are filling company coffers with cash. As earnings fall over the rest of the year, so will the dividends.

That has already happened amongst companies that do not have the magic confluence of costs in rubles but sales in dollars. Russia's leading commercial TV station CTC Media, which has costs in dollars but revenues in rubles, has already said it will not pay dividends this quarter because of falling ad sales. Pump maker HMS and metal producer MMK (Magnitogorskiy Metallurgicheskiy Kombinat) have also said among others they will forego dividends this quarter for similar reasons. 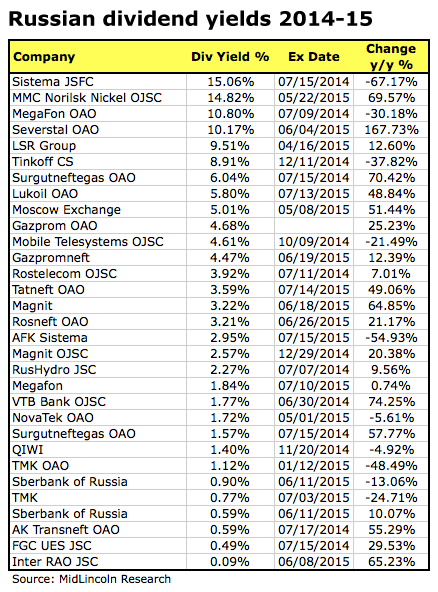