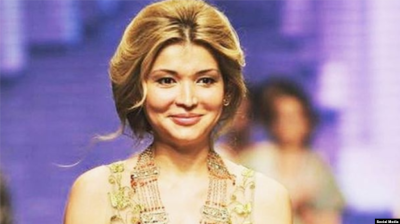 Karimova was in March handed a prison sentence of more than 13 years after being convicted of extortion and embezzlement. / Social media, file photo.
By bne IntelIiNews May 3, 2020

Independent global media organisation OpenDemocracy has published new details of the third round of prosecutions mounted against Gulnara Karimova, the disgraced daughter of late Uzbek autocrat Islam Karimov. The details elaborate on the role of Kazakhstan-based entity Visor group in events that took place prior to Karimova's demise.

The trial stemming from the prosecutions began in January in Tashkent. Karimova, 47, on March 18 was handed a prison sentence of more than 13 years after being convicted in a new extortion and embezzlement case. Karimova has been in a Tashkent prison since March 2019 for allegedly violating the terms of her house arrest—the house arrest was part of a five-year sentence she was given in 2015 on charges of embezzlement and extortion. In August, the Uzbek Prosecutor-General's Office said Karimova was accused of illegally purchasing state-owned shares in two Uzbek cement plants, Bekabadcement and Kuvasaycement, and then selling them to foreign business people after supposedly using threats to coerce the original owners to hand over their companies. The Prosecutor General has also claimed that Karimova helped these foreign investors commit further illegal activity. The current Uzbek government is attempting to seize $1.5bn in foreign assets including luxury properties held by Karimova.

OpenDemocracy found that while Karimova’s latest trial was held behind closed doors and the identities of the foreign investors were not identified in court, details were revealed in a 2017 interim decision delivered by the International Centre for the Settlement of Investment Disputes (ICSID), a World Bank arbitration tribunal.

“The 2017 decision was issued after investors with Kazakhstan’s Visor group initiated a damages claim against the government of Uzbekistan of ‘no less than US$500 million’. The case, which was started in 2013, pivots on the same two cement plants - Bekabadcement and Kuvasaycement - in the recent case against Gulnara Karimova, which were apparently purchased from Uzbekistan’s former first daughter,” the report said.

Almaty-based Visor group, founded by a prominent businessman, Aidan Karibzhanov, is an equity investment firm specialising in the ex-USSR region, the report said. Karibzhanov worked as a managing director of Kazakhstan’s Kazkommertsbank in the late 1990s and left the bank in 2001 to established Visor the same year. He was appointed managing director of Kazakhstan’s sovereign wealth fund, Samruk-Kazyna, in November 2008. The fund issued a $985mn financial lifeline in February 2009 to Kazkommertsbank after it was harmed by the global financial crash. At the time, Kazkommertsbank also happened to be bankrolling Visor’s cement investment in Uzbekistan.

“The Visor investors entered Uzbekistan’s cement industry in 2006, through the purchase of stakes in Bekabadcement and Kuvasaycement,” the report noted. “This acquisition and consolidation of shares took place through a transnational corporate structure in a number of the world’s key secrecy jurisdictions, where company and financial information is often difficult to access.”

The Visor investors claimed in a testimony to the World Bank tribunal that they thought that the companies were being purchased directly from Gulnara Karimova, despite her name missing in the share purchase documents, according to the report. The tribunal concurred that the purchase price of $33.98mn was not official evidence of a bribe. The Uzbek government, however, argued that the purchase price allegedly contained a bribe payment of $8.2mn. Karimova is known to have relied on inflated share purchase agreements to facilitate bribe payments in her dealings with foreign investors in the Uzbek telecoms sector. Filings made with the Tashkent Stock Exchange in 2006 indicated a sale price of $2.2mn, while a private share purchase agreement made in England indicated an actual purchase price of $33.98mn, the Tashkent government argued.

OpenDemocracy quoted the tribunal remarking that “the deliberate act of entering a false price on the exchange is not equivalent to the intent to defraud” and as adding that “even if there were some overpayment [in the English agreement], the mere fact of such an overpayment would not in and of itself establish that the overpayment should be regarded as a bribe”.

Moreover, according to the tribunal, Uzbekistan’s government “did not (a) provide witness testimony from Ms. Karimova who at the time was in the government’s custody or (b) explain why this would not have been possible”.

The Uzbek government alleged the funding received by Visor from Kazkommertsbank to finance the Uzbek cement operations was disproportionate to the value of the two plants. It also alleged the loans were part of a fraud scheme pursued against the Kazakh sovereign wealth fund, managed by Karibzhanov at the time when the fund bailed out Kazkommertsbank.

The World Bank tribunal rejected Uzbek government allegations that the loans were evidence of a related-party transaction or fraud, the report said.

Visor alleged that between 2010 and 2013 the Uzbek state waged an illegal campaign of persecution and expropriation, ultimately costing the company $500mn in damages after they lost their investment in the cement factories. The damages stem mainly from a $320mn Kazkommertsbank loan and subsequently accrued interest, OpenDemocracy noted.

However, OpenDemocracy pointed out that the tribunal decision did not detail how the $320mn investment was applied, as the investors stated that “their intention was to invest in the BC [Bekabadcement] and KC [Kuvasaycement] plants and then, at an opportune time in terms of market conditions, to sell on their interest.”

“US$437 million is a sizable sum by sector standards,” OpenDemocracy argued. “Looking at Uzbekistan’s cement industry over the last decade foreign investors have established new cement plants with over a million tons capacity from investments ranging between $115-150 million.”

All in all, the report concludes that little adds up in the details of the case as stories from both sides seem to contain inherent internal contradictions.

Kazakhstan: Swathes of land confiscated from Nazarbayev’s brother ahead of vote
COMMENT: The new Cold War will be different, and not only because of China
Kazakh manufacturing PMI signals stable conditions in January