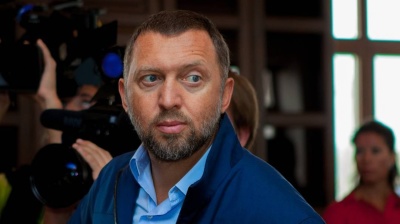 Russian oligarch Oleg Deripaska has slated a memo from the US authorities accusing him of political interference and criminal activities.
By Ben Aris in Berlin May 29, 2019

Russian metals magnate Oleg Deripaska slammed an evidentiary memorandum issued by the US Treasury’s Office of Foreign Assets Control (OFAC), which sets out its justifications for last year’s April 6 round of sanctions that specifically targeted the businessman and his companies, as well as a few other prominent tycoons.

Deripaska claimed in a statement on his website that the poorly compiled document is “full of false claims and factual inaccuracies” as well as being “guided by considerations of personal revenge”, but the sanctions imposed on him as a result have cost his companies and their investors over $15bn.

“This is a poorly researched report riddled with false statements and factual inaccuracies. It’s outrageous that there seems to be no burden of proof required for OFAC’s bureaucrats to indulge personal vendettas by ruining a man’s life, his businesses and leaving at risk hundreds of thousands of people, including workers and members of the community, as well as investors (Russian and international). This is more than professional incompetence — it looks like nothing short of gross misconduct in public office and raises substantial questions about the integrity and true intentions of OFAC's investigations,” the statement says.

While the April sanctions targeted several oligarchs, including Viktor Vekselberg who helped fund US President Donald Trump’s inauguration ceremony, those aimed at Deripaska’s businesses were particularly painful. US investors were not only banned from doing any business with Deripaska or his companies but also ordered to sell all securities issued by his companies. The result was chaos on the international metal markets as Deripaska’s Rusal, one of the largest producers in the world, and bankers holding Rusal and other companies’ stocks and bonds faced losing hundreds of millions of dollars as these securities became unsellable overnight. Rusal’s share price on the Hong Kong exchange collapsed from a post-IPO high of HK$13 to HK$2, wiping hundreds of millions of dollars off its market capitalisation.

As the pain of sanctions on Rusal started to bounce back on western investors and threatened to push up prices in the US for products using Russian aluminium, like cans of Coca-Cola, the OFAC at first pushed back the deadline for compliance, before lifting the sanctions entirely in December – the first and only sanctions on Russia to have been lifted in the last five years.

OFAC claims that Deripaska was acting on behalf of “senior Russian officials” and “operates in the Russian energy sector,” claims that Deripaska hotly denied. OFAC cited several articles to support it claims, which Deripaska criticised as part of a media war against himself and Russia in general by the international press.

One of the cited articles claimed that Deripaska purchased the KAP aluminium plant in Montenegro in 2005 as part of President Vladimir Putin’s plan to seize control over the country’s economy.

Deripaska’s office called it a lie saying that the facility was purchased for commercial and not political reasons. Moreover, “the KAP [aluminium plant] has never been central to the economy of Montenegro, so the suggestion that it could have been bought for political reasons is utterly absurd and ignores commercial, political and economic reality,” Deripaska’s statement says.

The acquisition of the plant was supposed to be part of a series of wider investments to build up an aluminium production complex that also included a stake in a local bauxite mine and the purchase of a coal mine to provide fuel for the power station in a complicated deal agreed with the government, Deripaska claims. Later the government changed the rates it was intending to charge for power and the plant went bust and was sold back to a government owned company.

The claim that Deripaska was involved in the energy sector was also dismissed out of hand as his energy holding EN+ is a utilities company catering to the domestic market and not an oil and gas producer.

Among the citations in the OFAC report justifying the sanctions was a reference to a Deripaska quote in an article in the Financial Times saying “I don’t separate myself from the state”.

Deripaska claims the single line was from a wider conversation about Russian businessmen's role in the economy and was taken out of context.

“The interview took place in 2007, when Russia’s most prominent businessmen were leaving the country to invest across the border and spend their time in London. The question Mr. Deripaska was asked was why he chose to stay in Russia. The point that he made was simply that he doesn’t detach himself from his homeland and can’t imagine his future anywhere else,” Deripaska’s statement says.

Deripaska has sued the OFAC for defamation in the US courts and the OFAC statement was part of its defence sent to the court on May 21.

In what could be the most wounding counteraccusation Deripaska made he claimed that the action taken by OFAC was based on hearsay and not hard evidence, but most importantly the punitive actions by OFAC officials ignored the golden rule of "innocent until proven guilty.”

“The accusations about Mr. Deripaska’s alleged engagement with organised crime networks are utterly false and to this day remain completely unsubstantiated. He has never even been charged with a crime or investigated, let alone convicted,” the statement says.

“US Executive Orders [EOs] 13661 and 13662 which OFAC based the designation on, very clearly define the possible causes for imposing sanctions and leave no room for misinterpretation. The allegations listed in OFAC’s report should have been tested against the requirements set out in these EOs. However, not one of the allegations made match the EO criteria, which means that OFAC has ignored the basic principle of the American legal system — the presumption of innocence — and had zero legal grounds for the destructive actions that they have taken,” the statement concludes.

Preliminary results show clear victory for HDZ in Croatian general election
8 hours ago
NBU lionises Smolii, clarifies cancellation of Eurobond decision
1 day ago
Serbia declares state of emergency in Belgrade as coronavirus cases spike
1 day ago
No protests, but police continue to randomly arrest pedestrians on Belarus Independence Day
1 day ago
Governor Smolii’s departure from the NBU creates the risk of devaluation of the hyrvnia or default on its debt this year
2 days ago