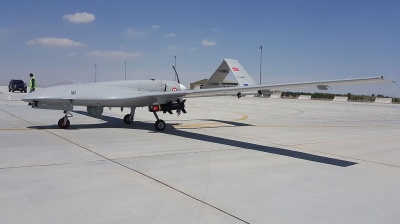 Turkey’s range of unmanned aerial combat vehicles have been very much in the shop window of late thanks to Turkish-built drones playing apparently successful roles in military offensives in Syria, Libya and northern Iraq. Turkey realised a programme to develop and produce drones over a short time-span of 10 years, partly thanks to technology controversially acquired from the UK.

He added that "brotherly" Turkey had provided financial assistance to Azerbaijan in the military field, with the Azerbaijani parliament having already approved an agreement for this.

Azerbaijan and ally Turkey do not have diplomatic relations with neighbour Armenia, with the unresolved row over the Nagorno-Karabakh breakaway territory—internationally recognised as part of Azerbaijan but controlled by ethnic Armenians—still a danger to peace in the South Caucasus.

Last November brought reports that Turkey was able to circumvent a US export ban on killer drones with the help of a missile component first developed in the UK.

The assistance reportedly enabled Ankara to become an emerging power in the lethal technology, with Turkey on the way to becoming the second biggest user of armed drones in the world.

The Hornet missile rack was devised by EDO MBM Technology, located on the outskirts of Brighton, in southern England. An article in Jane’s Defence Review from May 2016 shows the Hornet was supplied to Turkey’s Baykar, the manufacturer of the Bayraktar TB2 drone, at the crucial initial development stage. The Turkish company went on to develop its own missile racks.

Azerbaijan and Turkmenistan have agreed on a new programme to install fibre-optic cables linking the two countries under the Caspian Sea, Trend reported on April 16. The deal would see ... more

Azerbaijan has reported its first death caused by the coronavirus, BBC Azeri reported on March 12 as the country continued to go into lockdown in response to the spread of the pandemic. The person ... more