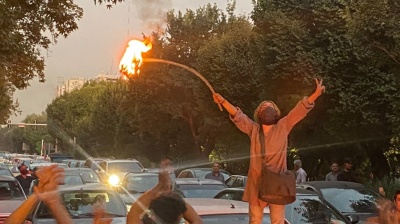 The protests have spread to around 50 towns and cities. / social media.
By bne IntelIiNews September 21, 2022

The official death toll from the Mahsa Amini protests that have swept Iran rose to eight on September 21, the sixth straight day of the unrest. There were growing fears that the security forces could be on the verge of mounting a violent crackdown.

Many protesters claimed that the number of those who have lost their lives in the protests held across around 50 towns and cities must be considerably higher than eight. There was particular anger expressed on social media as unverified claims circulated that a 16-year-old boy, Amin Maroufi, from the town of Ashnoya in the western Kurdistan province, was killed by a bullet to the heart shot by security forces.

Iranian official media and a local prosecutor on September 21 stated that four people, including a police officer and a pro-government Basij militia member, had been killed in clashes during the past two days. Norway-based Kurdish human rights group Hengaw gave an assessed death count of 10, adding that 450 people had been wounded and 500 arrested.

The demonstrations erupted over the death in detention last week of ethnic Kurd Mahsa Amini, a 22-year-old from Kurdistan province. She was detained by morality police in Tehran, who claimed she was wearing a hijab improperly and was clad in other “unsuitable attire”. Officials have claimed that the explanation for her death was heart difficulties that caused her to collapse and fall into a coma, but some witnesses assert she was beaten by police officers.

The protests amount to the largest seen in Iran since a wave of demonstrations in 2019 was sparked by a sudden hike in gasoline prices. In that unrest, hundreds, and possibly up to 1,500 people by some accounts, were killed.

Officials have claimed that some protesters in the ongoing protests may have been shot by armed dissidents attempting to stir up trouble against the government and supreme leader.

However, Diana Eltahawy, Amnesty International’s Middle East deputy director, put out a statement, reading: “Iran’s security forces will continue to feel emboldened to kill or injure protesters and prisoners, including women arrested for defying abusive compulsory veiling laws, if they are not held accountable.”

Internet watchdog NetBlocks said that amid the unrest access had been restricted to Instagram—the only major social media platform that Iran usually permits—and that some mobile phone networks had been shut down. "Iran is now subject to the most severe internet restrictions since the November 2019 massacre," NetBlocks said.

Fars news agency, close to the elite Islamic Revolutionary Guard Corps (IRGC), carried video footage accusing protesters of torching a mosque, an Islamic shrine and buses, attacking a bank and pulling off a woman's veil. Such accusations against dissidents, noted Reuters, have preceded violent crackdowns after protests dating back to unrest in 2009. "We are getting warnings from the security organisations to end the protests or face jail," an activist in Kurdistan province told the news agency.

Unverified videos shared on social media included one showing a man scaling the facade of the city hall in the northern city of Sari and tearing down an image of Ayatollah Ruhollah Khomeini, the late founder of the Islamic Republic of Iran that emerged after the Islamic Revolution started in 1979. Another showed hundreds shouting "death to the dictator" at Tehran University.

At the UN general assembly in New York on September 22, Iranian President Ebrahim Raisi, giving his first ever speech to the annual gathering, did not mention the demonstrations or Amini by name but hit out at Western countries for their reactions to “an incident under investigation in Iran”.

On the same day, Iranian Supreme Leader Ali Khamenei gave an hour-long televised speech in which he did not refer to the unrest, but warned young people not to “fall for western powers’ deception”.

Khamenei, 83, lately the subject of many reports of failing health, showed no clear sign of physical frailty.