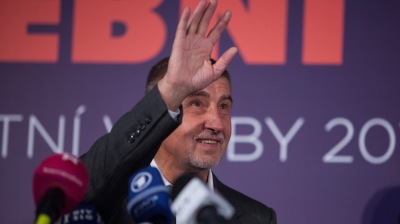 Andrej Babis's ANO party has slipped in the opinion polls over the past year.
By bne IntelliNews June 4, 2021

The Czech minority government of billionaire Andrej Babis' centrist ANO party and the Social Democrats (CSSD) survived a vote of no-confidence in the Chamber of Deputies on June 3. All 15 members of the Communist party (KSCM) left the lower house during the session and thus silently supported the government.

The final vote, after 12 hours of debate, was 89 votes in favour of the motion and 82 against, with 29 abstaining or absent. The goverment has 92 seats in the lower house. The opposition needed to get 101 MPs to vote in favour.

The five opposition parties that called for the no-confidence motion, the liberal coalition of Pirates and the Mayors and Independents (STAN), the centre-right SPOLU coalition of the Civic Democrats, Christian Democrats and TOP 09, together have 68 votes.

The far-right SPD of Tomio Okamura, which has 22 seats, also came against the government. But without the Communists the attempt to bring down the government was doomed.

This was the third attempt to bring down Babis' government – after November 2018 and June 2019 – and was criticised by the governing parties as an irresponsible step during the COVID-19 pandemic and merely a political gimmick ahead of the October general elections.

"The opposition does not have enough votes, we could have discussed a few acts instead. It is a waste of time today," said deputy prime minister and leader of the CSSD Jan Hamacek.

Yet opposition parties said they had a duty to call the motion, given the government's missteps over recent months. "The proven conflict of interests of Andrej Babis, the [Health Minister Petr] Arenberger case, the trip of [Interior] Minister Jan Hamacek to Moscow, the failure of our diplomacy in the matter of the Vrbetice case. In the last month alone, there have been many reasons which in a normal country would lead the government to ask for a no-confidence vote itself,” said Vit Rakusan, leader of STAN, before the vote.

The stance of the KSCM was critical. The KSCM had withdrawn its support from the government in April but the party, which is wracked by divisions over its leadership and over its stance towards the government, decided on the morning of the vote not to bring it down but abstain.

"The KSCM has decided to leave the hall in unity, and not to vote for no-confidence in the government. Perhaps not a logical step for someone, but disunity [of KSCM] could be … [a worse message] for voters. The fact is that fighting inside the party when the government is about to finish [its electoral period] is not worth it," said KSCM MP Jiri Dolejs.

Dolejs argued that President Milos Zeman stated several times in recent weeks that if the Chamber of Deputies voted in favour he would let Babis to rule until the elections anyway.

The vote acted as a dress rehearsal for the electoral battle that will take place in October, with ANO's support on the slide for more than a year and the opposition demonstrating greater unity and purpose.

According to the latest opinion poll by the Median Agency, had the general elections taken place in May, the coalition of Pirates and STAN would have won with 24% of votes (56 seats in the Chamber), followed closely by Babis´ ANO with 23% (also 56 seats) and the coalition SPOLU with 19.5% (45 seats).

Compared to previous surveys, both opposition coalitions, which were created to topple Babis' government, have lost a few points to ANO, which had returned to second place over SPOLU.

As both coalitions who triggered a no-confidence motion against Babis have ruled out working with him after the general election, the most likely (majority) government would be Pirates/STAN and SPOLU with a wafer-thin majority of 101 votes.

SPOLU might face a further drop in preferences, however, due to the recent resignation of its MP Dominik Feri (TOP09), after he was accused by several women of alleged inappropriate behaviour and sexual abuse. He was one of the main faces of SPOLU for the elections, with a strong following among young voters (with more than a million followers on Instagram).

Political analyst Petr Just at Charles University said that sexual harassment does not kill political preferences in Czechia, as it does in the US, but it may have a negative impact on SPOLU. However, these votes are now expected to go to the Pirates, which has already attracted support away from the TOP09 part of the SPOLU coalition.