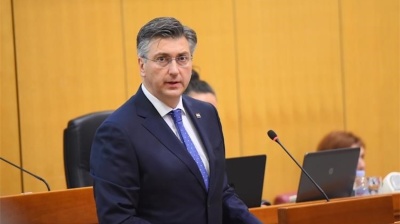 Croatian Prime Minister Andrej Plenkovic presented a package of measures to help the economy worth more than HRK30bn (€4bn) in the Croatian parliament on March 18.

The measures are expected to be passed in an accelerated procedure to allow the authorities to start extending support to businesses hit by the coronavirus (COVID-19) pandemic and efforts to contain it.

Speaking to MPs, Plenkovic pointed to the acceleration in the number of infections in the last two weeks, especially in Europe, but said the situation is under control in Croatia.

“More drastic measures are needed to keep the situation under control as much as possible … action needs to be taken right now to prevent the rapid growth that has occurred in these countries,” said the prime minister.

Along with the package of economic measures to safeguard jobs and liquidity of businesses, the government has proposed amendments to the Civil Protection Act to limit gatherings and social contacts as much as possible.

Among the proposals outlined by the prime minister are tax payment deferrals and support for businesses that keep on all their employees during the crisis. There are also sector-specific measures directed at the tourism sector such as deferred payment of tourist taxes.

Croatian MPs voted on May 18 to dissolve Parliament to make way for a general election to take place in June or July.  It was previously unclear whether Croatia would be able to hold a ... more

Croatia heading for general election in June or July

The Croatian parliament will be dissolved on May 18 to pave the way for a general election at the end of June or the beginning of July, Prime Minister Andrej Plenkovic told journalists after a ... more