Croatia had second-deepest GDP contraction across the EU in 2Q20 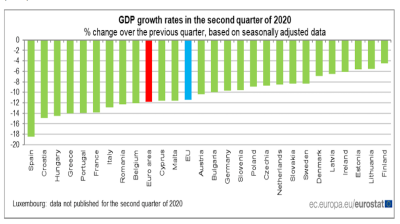 Croatia experienced the second-deepest quarter-on-quarter contraction in GDP across the European Union in the second quarter of the year as the coronavirus (COVID-19) pandemic and lockdown took its toll on the economy.

In annual terms, EU countries averaged a year-on-year fall of 13.9% in 2Q20; for the eurozone the average contraction was somewhat deeper at 14.7%, according to European statistics agency Eurostat.

The single deepest q/q contraction was in Spain at -18.5%, which was a 22.1% y/y contraction, followed by Croatia with a contraction of 14.9% q/q and 15.1% y/y. Both countries have large tourism sectors, which were badly hit by the crisis, with tourists only starting to trickle back towards the end of the quarter.

On the other hand, the least affected economies by the pandemic were those in Northern Europe: the Baltic states and the three Nordic EU members, Denmark, Finland and Sweden.

Broken down by component, Eurostat reported a very strong negative contribution from both household consumption and gross fixed capital formation, as well as from the external balance and government final expenditure. On the other hand, changes in inventories was slightly positive in the euro area and slightly negative in the EU.

Meanwhile, the number of employed people decreased by 2.9% in the euro area and by 2.7% in the EU in 2Q20, the sharpest declines since the time series started in 1995.

Lukashenko’s crackdown leads to exodus of IT professionals

US’ Dexcom to open services centre in Vilnius in 2021
Lithuania’s exports decreased by 8.2%, imports by 13.6% y/y in 1H20
Lukashenko’s crackdown leads to exodus of IT professionals