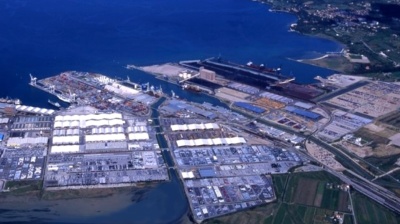 Representatives of Luka Koper, the operator of Slovenia’s only sea port, and Slovenian Sovereign Holding (SSH), which manages state-owned assets, are holding an emergency session on July 4 after three days of strike action.

Workers blocked access to the Adriatic port on July 1, accusing the government, which owns the port, of undermining Luka Koper’s development and “lying about its plans”. July 3 was the third consecutive day of protests and followed a month-long standoff over the appointment of new supervisors at Luka Koper.

Slovenian Press Agency (STA) reported that on the evening of July 3, the workers’ council agreed with the management to partly relax the blockade and start working a single shift on July 4. However, the strike has already caused significant losses, with railways operator Slovenske zeleznice saying it is losing €700,000 a day.

Around 200 workers downed tools and blocked access to the port with forklifts and other heavy machinery before the start of the annual shareholders meeting on July 1, when three of the nine supervisors, including the chief supervisor, were due to be replaced.

Even though SSH shelved the proposal and its chairman Marko Jazbec stepped down, workers continued protesting, demanding a meeting with Cerar and the resignation of Infrastructure Minister Peter Gaspersic and finance ministry state secretary Metod Dragonja.

"The workers are appalled at the government's indifference and lies. We are determined to insist until the end and expect a long journey," reads the workers' council's press release.

Workers claim Gaspersic is subverting the company’s further development, including the planned construction of a second rail track to the port.

The workers' council says it has obtained an email containing Gaspersic's explanations of plans to overhaul the management model at the port. The email discusses establishing a port administration and revising the concession contract with Luka Koper to give a second concession to another company, STA reported on July 2.

The workers’ revolt resulted in the shareholders’ decision to not put forward a proposal to dismiss chief supervisor Alenke Znidaršič Kranjc and supervisors Elen Twrdy and Andreja Sercerj. However, Jazbec did step down.

"Given all the developments and today's blockage of the operation of Luka Koper, I have decided to come to a mutual agreement with the supervisory board of SSH to leave the management board," Jazbec said on July 1, adding that he hoped SSH would be able to ensure that politics and private interests would not prevail at Luka Koper, an SSH press release reads.

Workers have demanded a meeting with Cerar but he has so far refused, saying he will not accept any ultimatums. He urged the port's management to immediately restore normal working conditions.

STA reported that on July 2 Slovenske zeleznice introduced congestion limits affecting international train transport on July 1. Forty trains were unable to get to the port, while six, packed with goods that arrived by sea, were stuck at the port. As a result, the rail operator is suffering damages of around €700,000 a day. Road transport also continues to be affected, as workers allow only lorries with highly perishable goods to enter the port.

"We would like the situation to get back to normal as soon because it is causing enormous economic damage," the company said in a statement. According to the latest STA report from July 4, the supervisors of SSH and Luka Koper are meeting on July 4.

The government holds a 51% stake in Luka Koper directly, with state asset management funds controlling another 16.28%, which puts the state's total stake in the port at over 67%.

Luka Koper ended 2015 with better results than expected, posting a record net profit of €26.6mm, which is expected to be followed by an even more successful 2016, when the planned net profit is €35mn.

Cerar visited Luka Koper for the first time on May 27 when the Koper-Divaca railway project, which envisages the construction of the second rail track between the port and the inland hub of Divaca, was launched. The project is strategically important as it connects the capital Ljubljana with the Adriatic port. In April a new special purpose firm called 2TDK was set up to manage the construction of the 50km second rail track.