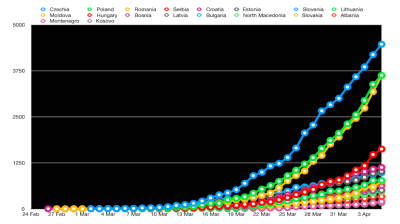 The Central and Southeast Europe region has managed to avoid the acceleration in infection rates that propelled the number of cases into the tens or hundreds of thousands in some Western Europe countries and the US.
By bne IntelliNews April 6, 2020

The rate of increase of new coronavirus (COVID-19) infections has started to slow or even flattened across much of Central and Southeast Europe.

While the number of cases is still rising, there has not been an acceleration in the rate of increase as seen in some West European countries and the US.

Looking at data compiled by the World Health Organisation (WHO), on April 5 it had taken 11 days for the number of infections to double in Slovenia, and more than a week in numerous countries across the region.

This is in contrast to 10 days ago, when it had taken barely two to three days for the number of infections to double in most Central and Southeast European countries.

The lack of acceleration in the infection rate in these countries is most likely down to the strict social distancing measures and lockdowns in countries across the region. With the virus taking up to 14 days to show up, the impact of these measures would only have become apparent at the tail end of March and early April.

The three worst affected countries in the region are Czechia, where the total number of infections reached 4,472 as of April 5, Poland (3,627) and Romania (3,613). However, nowhere in the region have cases reached the tens — or hundreds — of thousands, as has been seen in Italy and Spain.

Czech Health Minister Adam Vojtech said on April 6 that they may consider lifting restrictions if the levelling off of new infections continues, Reuters reported. “We are clearly saying now that we are able to relatively well manage the pandemic here, it is not the pandemic managing us,” the minister told a press conference.

The Central and Southeast European countries that have seen their infection rates stop increasing have mostly managed to contain the number of cases in the hundreds rather than thousands. Their governments are remaining cautious, with both Bulgaria and Slovenia having recently extended emergency measures.

On the other hand, the number of cases are increasing particularly fast in Moldova, where they have doubled in around three days. This is of concern, because as the poorest country in the region Moldova is one of the least equipped to handle an epidemic. Infection rates are still relatively fast in Romania and Serbia, despite easing somewhat in recent days. 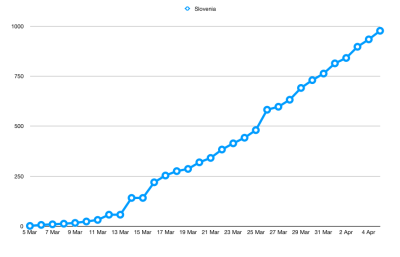 A Slovenian government spokesman said on April 5 that the strict lockdown measures against the spread of the coronavirus are working and will last for another “two to four more weeks".

The measures were imposed three weeks ago and include the closure of schools, bars and restaurants and a ban on public gatherings.

"Once we start relaxation measures, they should be carefully planned, with the awareness that we will have to live with the virus and the epidemic for a while," government spokesman Jelko Kacin said.

Three days earlier, the parliament in Ljubljana endorsed a €3bn economic stimulus package to offset the impact of the coronavirus pandemic on the local economy.

Prime Minister Janez Jansa told MPs the package is the first of three. His government is already working on a second package, and a third will follow after the epidemic.

Virus contained but worries about democracy in Bulgaria 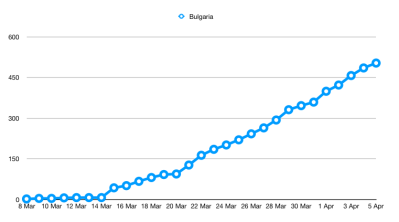 At a session on April 3, Bulgaria’s parliament approved an extension of the state of emergency by one month until May 13 as requested by the government and also adopted the proposed budget revision.

Prime Minister Boyko Borissov said that the peak of infections is expected in the next two or three weeks. He also said that the government will ease the restrictions when the infection rate declines for three consecutive days.

While the emergency measures appear to be having an effect on reining in the spread of the epidemic, they have caused concerns about the additional powers given to the government. Opposition politicians sought to extend the state of emergency only until April 30, but failed to have this approved.

Over 10,000 people signed a petition calling for the resignation of Health Minister Kiril Ananiev after he signed a highly controversial deal worth BGN100mn (€47.8mn) for the construction of a national children’s hospital. Critics say Ananiev abused the state of emergency by signing the contract during a period when protests and public discussions are banned.

Peak of epidemic prolonged in Estonia 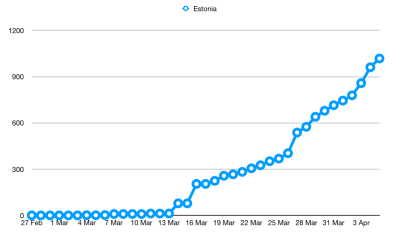 Speaking to public broadcaster ERR, virologist Irja Lutsar, who is part of the government’s COVID-19 working group, said that efforts to delay the peak of the epidemic and avoid exponential growth had succeeded. Lutsar forecast a long, flat peak of infections in the country.

Meanwhile, the government is seeking to alleviate the impact on the economy. In response, Tallinn has inflated its programme to fight the effects of the pandemic to €2.6bn – equivalent to around 9% of GDP – from the original €2bn.

The government expects the country’s GDP to contract 8% in 2020 but hopes for the fall to be just half that forecast, if the relief programme works.

According to Estonia’s central bank Eesti Pank, GDP will fall 6% this year, while Swedbank predicts a contraction of 5%.