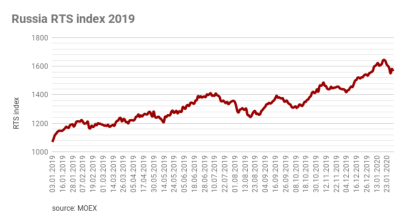 The spread of the coronavirus virus has killed off the spring euphoria on the Russian stock market. The RTS index fell back below the 1,600 mark on the last day of January, giving up all the gains made YTD.
By Ben Aris in Berlin January 31, 2020

Russia’s stock market was flying over the first two weeks of January, but a growing panic due to the spread of the coronavirus flu virus in China has killed off the euphoria and the dollar-denominated Russia Trading System (RTS) index has given up all its gains to date, falling back into the red as of January 31.

Russia was the favourite emerging markets (EM) stock market as traders got back to work in January, and overtook the other leading EM markets to see around $1bn of inflows into Russian assets.

The RTS soared by more than 10% as the spring rally got underway, only to pause in the middle of the month as reports of the virus outbreak hit terminals.

The spring rally was the continuation of a strong Santa rally that saw the RTS end 2019 returning 45%, and some of the leading ETFs returned even more, as bne IntelliNews reported in its new monthly ETF and fund monitor.

The rally saw the RTS pass the 1,600 level for the first time in seven years, but the index has now fallen back again and was at 1,545 at the time of writing of the market's open on January 31. The spring rally has now paused.

All the major sectors have sold off, with financials up only 3% YTD, previously the most consistently good performer, and oil and gas stocks are in the red having lost 2% YTD as of January 31.

The only exception was utilities, which have returned 12% YTD, massively outperforming the index as a rally in power companies that started last year continues. The sector is in the middle of a reform that clearly has impressed investors, who have taken the current sell-off as a buying opportunity.

“The positive flow momentum of the past two months has abruptly ended with investors trying to assess the economic damage of the new coronavirus. We continue to see tactical downside risks for the market in the short term,” Slava Smolyaninov, chief strategist and deputy head of research at BSC Global Markets, said in a note. 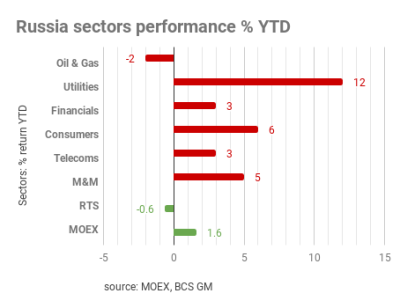 Russia-dedicated funds saw $80mn of outflows vs $100mn inflows in the previous week – the first week of outflows this year.

Russia-focused bond funds, on the other hand, saw some very modest inflows of $20mn vs $140mn of inflows in the previous week to make nine straight weeks of inflows.

Most importantly, the exchange-traded funds (ETFs), which have become the main channel for investing into Russian stocks, have turned tail and left. Outflows from Russia ETFs resumed this week. Outflows from Russia-dedicated ETFs were $57mn and this was the key driver behind the negative reading for Russia-specialised funds last week, reports BCS GM.

“Investors were apparently taking profits after the last two months’ excellent rally. At the same time, as we suspected, the massive inflow campaign in GEM equity funds ended abruptly last week due to the spread of the coronavirus fears. Yet global EM funds still reported net positive, albeit minor, $235mn inflows,” Smolyaninov said.  “We expect EM equities will not be able to attract new money in the next several weeks and see further downside risks for the Russian market.”

The situation for bond investors is a bit different given Russia’s excellent macro fundamentals and falling inflation and interest rates.

COMMENT: ‘Stage 2’ of Russian business response to coronavirus: a view from the trenches

Digital lockdown
ING: COVID-19 could leave a legacy of EM debt distress
COMMENT: ‘Stage 2’ of Russian business response to coronavirus: a view from the trenches