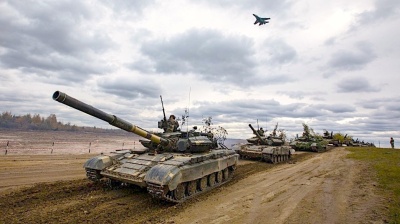 Doubts over the US commitment to military support for Ukraine were sown after reports that a $100mn programme was suspended only days after US President Joe Biden met with Russian President Vladimir Putin.
By Ben Aris June 20, 2021

There is a confusion over the commitment of the Biden administration to military support for Ukraine after reports appeared over the weekend that a $100mn military aid package that includes lethal weapons had been suspended only days after US President Joe Biden met with Russian President Vladimir Putin at a summit in Geneva.

US political news site Politico reported on June 19 that the package had been suspended, citing four sources in the White House, without explaining the reasons for the decision.

However, the White House spokeswoman Jen Psaki denied the report only a few hours later, saying that the idea that Washington would hold back aid was “nonsense.” Psaki pointed to a separate $150mn military aid programme that had been approved a few days before the Geneva summit.

“We have now provided the entire amount appropriated by Congress through the Ukraine security assistance initiative,” Psaki said.

However, it is not entirely clear if the $100mn additional funding programme was the same as the $150mn programme that was cleared in June that is part of the US military ongoing aid to Ukraine and there was an earlier $125mn package that was cleared in March. The $100mn programme was approved in April as an additional programme after Russia built up a massive amount of forces on Ukraine’s border in the run-up to the Geneva summit.

Many observers took the confusion over the support as another sign that the US ardour for supporting Ukraine is cooling. It was reported on July 19 and also asked if it was part of an agreement between Biden and Putin on Ukraine that has not been made public.

“Whatever the reasoning behind Washington’s freezing of arms aid to Ukraine – and I assume that will become clearer – the optics here are bad. It will look to many like part of a post-Geneva quid pro quo, but without an obvious “quo” from Moscow,” Sam Greene, professor of politics at King's College London, said in a tweet.

Ukraine disappointed with the US

Even the combined $275mn is not much more than the $250mn that the US sent the embattled country in 2020 to bolster its defence against Russian aggression in the Donbas, as the US remains afraid of being sucked into a proxy war with Russia via the Donbas.

Ukraine was disappointed by the low key support it got from Biden, who was on tour in Europe in the last 10 days, culminating with a one-on-one summit with Putin in Geneva.

Biden met with the G7 leaders in the UK, where they issued a joint statement that called on Russia to end its aggressive tactics and threw their collective weight behind Ukraine’s sovereign integrity.

Biden went on to Brussels for a Nato summit, but baulked at agreeing to launch a Nato Membership Action Plan (MAP) for Ukraine, despite Ukrainian President Volodymyr Zelenskiy's demands for more clarity on the military alliance’s ultimate intention for his country.

Moreover, at a press conference Biden went out of his way to say that Ukraine had to do more on corruption before Nato membership could be contemplated.

Moreover, the US has taken several decisions recently that are counter to Ukraine’s interests. The most important was Biden’s decision not to continue the sanctions regime against the Nord Stream 2 gas pipeline that he said was a fait accompli, and which will bypass Ukraine completely and cost it some $2bn in lost transit fees.

It appears that the US is increasingly unhappy with Kyiv’s lack of commitment to reforms. It was reported that Biden was considering a meeting Zelenskiy before the summit with Putin, but the idea was dropped after the Ukrainian Cabinet dismissed the widely respected former head of state-run oil and gas company Andriy Kobolev on April 29 in a move widely criticised for abusing corporate governance rules. Biden has agreed to receive Zelenskiy in the White House, but in July, well over a month after his meeting with Putin.

Now only days after the Putin summit is over the White House reportedly has said it will suspend its additional $100mn worth of military aid to Kyiv.

A White House source told Politico that a National Security Council package of military aid is still intact, and could be sent to Ukraine quickly if needed, but had temporarily been put on ice, without explaining why.

White House press secretary Psaki took issue with the characterisation that aid to Ukraine was lacking: "The idea that we have held back security assistance to Ukraine is nonsense. Just last week – in the run-up to the US-Russia Summit – we provided a $150mn package of security assistance, including lethal assistance.”

Psaki seemed to confirm the Political report by admitting there were military funds in reserve that have not been released. The White House statement said that the additional military aid was ready but would be released only if Russia crossed territorial red lines: "We have also prepared contingency funds in the event of a further Russian incursion into Ukraine. As President Biden told President Putin directly, we will stand unwavering in support for Ukraine’s sovereignty and territorial integrity.”

Since Russia’s 2014 invasion of Ukraine and annexation of Crimea, the United States has provided a total of $2.5bn in military aid to Kyiv, including unarmed drones, radios and Javelin anti-tank missiles.

Few of the details of what Biden and Putin talked about has been released, but clearly the two men were trying to work out a new modus operandi and de-escalate tensions between their countries, Kadri Liik, a senior fellow of the European Council for Foreign Affairs, argued in an opinion piece. Part of this new approach is to “agree to disagree” on some issues, and Ukraine is clearly one of those.

According to some analysts – and there is a lot of disagreement over interpreting the events surrounding Ukraine – the upshot is the US could take a more pragmatic long-term approach to solving the issues surrounding as the Kremlin has dug its heels in over questions of Crimea and is not willing to de-escalate the tensions in Donbas until it has some sort of guarantee that Ukraine will never join Nato.

Many analysts believe that Biden is in a rush to reduce tensions with Russia, as he sees the conflict with the Kremlin as a distraction from his two main policy targets of dealing with domestic issues and a growing rivalry with China, which is increasingly challenging the US for primacy on the international stage. While Russia is increasingly allied with China, they are not seen as natural partners and a reduction in US-Russian tensions could go some way to weakening the ties between Moscow and Beijing. Certainly a strong alliance between Russia and China is not in the US' best interests.

ED: This article has been updated to include a US $125mn military aid package released in March that was omitted from the original version.

Russia raises key rate to 6.5% amid strong inflationary pressure
7 hours ago
Erdogan’s relations with West in danger of renewed deterioration in ‘Varosha’ row
7 hours ago
Ukraine makes surprise policy rate hike to 8% to fight inflation
13 hours ago
US court rules Kyrgyzstan in contempt for pushing ahead with local legal action against Kumtor Gold
16 hours ago
Turkey extends 'undeclared state of emergency'
23 hours ago