CONFERENCE CALL: Balkan co-operation in the shadow of war 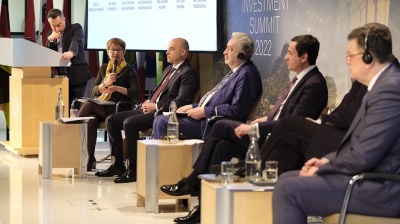 Just days after the Russian invasion of Ukraine, there was a strong consensus in favour of regional co-operation at a summit of the Western Balkans prime ministers on February 27, despite fears that the war in Ukraine could lead to increased tensions with the region.

Political leaders at the Western Balkans Investment Summit (WBIS) organised by the European Bank for Reconstruction and Development (EBRD) in London stressed the importance of cross-regional co-operation in particular in energy and infrastructure, as they pursue their common goal of EU accession.

EBRD president Odile Renaud-Basso started her introductory comments by reiterating the development bank’s support for Ukraine, then went on to stress the need for integration and co-operation to maintain stability in the Western Balkans.

“We all know the challenges the Western Balkans region faces. One is the difficult legacy of the past. Today we have to deal with the impact of the pandemic and geopolitical uncertainty. And there is much to be done to improve the region’s business environment,” Renaud-Basso commented.

“But the participation of the six leaders in this event sends a very powerful message to the rest of the world about the importance they attach to regional co-operation and their place in Europe.” She added that regional co-operation is “vital for the economic prospects and political stability of the Western Balkans”.

All six states from the region are aiming to join the EU, though some are further than others from this goal. European Commissioner for Enlargement Olivér Várhelyi talked of the importance of the accession process for promoting peace and stability in the region.

“Europe does not end in Zagreb or Budapest, the Western Balkans naturally belong here too. Now it is more important than ever to work on that as fast as we can, as deep as we can,” he said.

“We live of course in unprecedented times, be it the war in Europe, be it the COVID pandemic, and of course there could be other challenges coming up, but I’m convinced that as long as we work together relentlessly on security and stability in and around Europe we can contribute to the long-term peace of the continent,” the commissioner added.

“This is why no matter how little it might look it is important to … deliver the prospect of peace and stability for the people of the Western Balkans.”

There have already been efforts to promote regional integration including through the Open Balkans initiative – initially dubbed ‘mini Schengen’ – launched by Albania, North Macedonia and Serbia, but not yet joined by the other three states in the region. There are also numerous cross-border projects aimed at improving regional connectivity, in particular in the transport sector. Asked about investment priorities, the prime ministers all identified cross-border infrastructure projects, among others. For example, North Macedonia’s Prime Minister Dimitar Kovacevski identified priority projects including Corridor VIII and an electricity interconnector with Albania; Serbian Prime Minister Ana Brnabic listed the Sarajevo-Belgrade Highway, the “Highway of Peace” linking Nis, Pristina, Tirana and Durres, and the gas interconnector between Serbia and Bulgaria; Bosnian Prime Minister Zoran Tegeltija mentioned a rail link to Serbia; and, Montenegro’s Prime Minister Zdravko Krivokapic proposed that future highway projects should improve access to Italy and Turkey as well as connecting the countries of the region.

“Investing in Albania or other countries present is more than investing in a country, it’s investing in a region with incredible, still unleashed potential,” said Albanian Prime Minister Edi Rama. “I believe the Western Balkans are the new frontier for investment in Europe.”

Kosovo’s Prime Minister Albin Kurti talked of regional co-operation as a tide that will “lift all the boats towards EU integration and membership”.

Despite the common interest in regional co-operation, there are differences and outstanding conflicts between the Western Balkans states. The majority of countries from the region have condemned Russia’s actions in Ukraine and joined the western sanctions, but Serbia declined to adopt sanctions while at the same time expressing support for Ukraine’s territorial integrity. There are also fears that the conflict could contribute to a resurgence in tensions in the region. This is already a fear with Bosnia, where Serb politicians have been pushing for greater autonomy for the Serb entity Republika Srpska, and talking of secession. As the security situation in Europe has worsened, EUFOR has announced additional troops for Bosnia. There are also increased tensions in the mainly Serb populated northern Kosovo, where Pristina recently stepped up its security presence.

Nonetheless, it was clear at the summit that states from the region remain dedicated to the common goal of entering the EU, as well as pursuing greater economic prosperity, for which regional cooperation is the key.