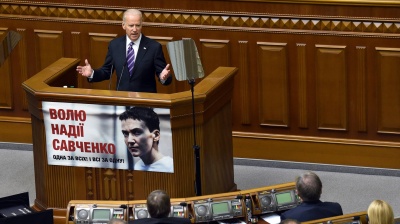 The Biden administration faces a tough nut to crack if it wants to help Ukraine, but what is on the agenda? He has personally been there six times and knows its problems probably better than any other US politician / wiki
By Robert Homans in Los Angeles November 24, 2020

Ukraine is now in the midst of a conflict, between reformers and the public on the one side, and powerful interests for whom these reforms are a threat on the other. The United States has an important, but increasingly marginal, role to play. The outcome of this conflict will go far to determine whether or not Ukraine continues on the path of being a free country living under the rule of law.

The most important thing President-elect Biden, along his foreign policy team made up of Secretary of State Designate Antony Blinkin, who has Ukrainian roots through his father, National Security Adviser Designate Jake Sullivan, and Ambassador to the United Nations Designate Linda Thomas-Greenfield, can bring to Ukraine is stability. The next most important thing President-elect Biden and his team can bring to Ukraine is for them to allow the foreign service professionals that the United States has been blessed to have working on Ukraine-related matters, both in Washington and, more importantly, at the Embassy in Kyiv, to do their jobs. Recently these two attributes, stability and strong support for our foreign service professionals in the field, has been sorely lacking.

It falls upon our foreign service professionals, especially those assigned to our Embassy in Kyiv, to support and encourage Ukraine’s anti-corruption activists, in the ministries, in Parliament and in civil society, by convincing them that the United States supports their work, and that we strongly discourage any effort to curtail their work. This support has been largely absent, especially in the last two years of the Trump Administration. Today, anti-corruption activists in Ukraine often find themselves under attack from two fronts: oligarchs and others who see their work as a threat to their business interests and, increasingly, from the government of Ukraine itself, including the Presidential Administration, some members of Parliament and the courts.

Being an anti-corruption activist in Ukraine these days can be dangerous, as we tragically saw in the case of Kateryna Handziuk, an anti-corruption activist from the Kherson Region who was doused with sulphuric acid and later died from her injuries, and Vitalii Shabunin, Head of the Anti-Corruption Action Centre, whose house was recently burned down by arsonists and his parents, who were in the house at the time, nearly killed. As George Kent, Deputy Assistant Secretary of State for European and Eurasian Affairs and former Deputy Chief of Mission at our Embassy in Kyiv, said in his testimony one year ago, before the House Intelligence Committee: “You can’t promote principled anti-corruption action without pissing off corrupt people.”

On the Ukrainian side, the appointment of Oksana Makarova as Ukraine’s next Ambassador to the United States should be seen as a welcome development. She is the former Finance Minister of Ukraine, and she is well respected in the United States.

The questions as to whether or not a Biden Presidency will be good for Ukraine relate to President-elect Biden himself. First, as Vice-President, President-elect Biden was part of an administration that refused to provide Ukraine with lethal defensive weapons, including Javelin anti-tank missiles and advanced sniper rifles and counter-battery radar. It remains to be seen whether or not, as President, Biden will continue the policy of the Trump administration in providing these weapons. This question of what the Biden administration will do with respect to military support to Ukraine has become even more important, as the United States has recently become more active in supporting the augmentation of Ukraine’s sea defences, including Navy gunboats with advanced sonar as well as anti-ship missiles.

Recently, the United States has been joined by Ukraine’s neighbour, Turkey, as a major weapons supplier to Ukraine. Turkey and Ukraine have reached arrangements, covering Turkey supplying Ukraine with advanced unmanned aerial vehicles and anti-ship missiles in return for Ukraine supplying Turkey with advanced gas turbines for naval ships, as well as advanced helicopter engines.

Second, much as he may try, President-Elect Biden is likely to be questioned by Ukrainians, especially by those in the Ukrainian government, about the activities in Ukraine of his son, Hunter Biden. Ukrainians often conclude, with good reason, that there is a direct linkage between nepotism and corruption. Nepotism is common among Ukraine’s elite, as a way to cement and maintain sources and flows of graft. Hunter himself has said that he would never have been appointed as a director of Burisma were it not for the fact that he is Joe Biden’s son. Furthermore, Joe Biden’s Office was warned about the optics of Hunter being a Burisma director by officials from our Embassy in Kyiv.

Finally, perhaps the Biden administration can do something to stop the activities of Washington DC professional service firms, from both ends of the political spectrum, from viewing Ukraine as a kind of financial trough, which they are free to slop. Hunter Biden and his business partners were an example, but only one of many.

Ukraine can also contribute to ending this practice by soaking up the money, often dirty money, that is often ending up in the accounts of these firms. Furthermore, President-elect Biden can make a speech distancing himself from his past championing, when he was a Senator from the State of Delaware, of anonymous Delaware corporations, often used by Ukrainian oligarchs to move dirty money into the US financial system.

The United States can make the process of drying up the dirty money easier for Ukraine by continuing to pursue Ihor Kolomoisky over his US real estate dealings, via the Federal Grand Jury in Cleveland. A petition for asset seizure has already been filed against Kolomoisky and his partners. A criminal indictment against Kolomoisky and his associates is likely to follow. The United States should also continue to pursue extradition proceedings against Dmytro Firtash, a proceeding that has lasted 6.5 years. Helping Ukraine neutralise two of its most significant oligarchs will go a long way towards weakening the Old Rotten System, under which Ukraine has suffered for most of its existence as an independent country.

Stability will be welcome in Kyiv, but the questions remain. Ukraine’s trajectory as a free country living under the rule of law is now in doubt, and resolving the doubts is entirely up to Ukrainians. The United States, no matter who happens to be in the White House, cannot directly help Ukraine in resolving this issue.

Azov commanders have remained behind in the Mariupol steelworks to continue the fight
Anthems of victory: How Ukraine is winning the online culture war
ISTANBUL BLOG: Erdogan spikes Nato accession talks with Sweden and Finland

COMMENT: Sanctions are working, but the West risks isolating Russian reformers instead of galvanising them
1 day ago
NEMETHY: Where are US markets? Where are they heading?
1 day ago
COMMENT: Constanta concerns
8 days ago
Sberbank faces a meltdown from its vast commercial real estate loan book
10 days ago
STOLYPIN: The sick man of Europe
11 days ago