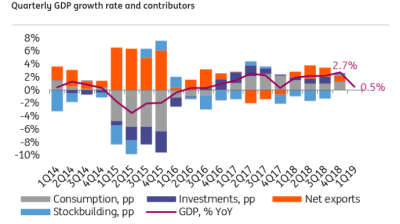 Russian GDP growth slowed from 2.7% year on year in 4Q18 to just 0.5% y/y in 1Q19, well below expectations. Unlike most commentators, we attribute this slowdown to a pause in the state CAPEX rather than to the VAT hike. We also believe a policy response is more likely to come from the Finance Ministry rather than the Central Bank

The preliminary official estimate of Russian GDP growth for 1Q19 is 0.5% y/y, which is well below the 1.2% y/y consensus and our 1.1% y/y expectations. This also suggests a very material deceleration vs. the 2.7% y/y reported for 4Q18.

The two key questions are: 1) what caused this slowdown and 2) what would be the policy response. The initial market comments suggest that the slowdown is attributed primarily to a VAT hike-related hit to consumption, and a more aggressive key rate cut is believed to be the most likely response. We cannot fully subscribe to this view. 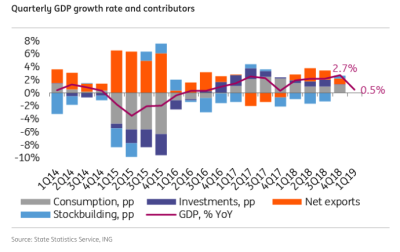 The slowdown reflects a halt in investment growth, as suggested by zero construction growth...

Regarding the causes of GDP slowdown, there will be no official breakdown until mid-June, however, some preliminary conclusions could now be made.

We believe the bulk (1.7 pp out of 2.2 pp) of the slowdown is attributable to a drop in investments and inventories (accounting for c.25% of GDP) and stringent government consumption (c.15% of GDP), while the contribution of net exports remained flat. This view is supported by two key observations:

First, the growth in construction, which is a proxy for investment activity, slowed down materially from 4.1% y/y in 4Q18 to just 0.2% y/y in 1Q19; while industrial output, an indicator of producer activity also showed deceleration from 2.7% y/y to 2.1% y/y respectively. Also, according to the Ministry of Economic Development, the drop in imports of investment goods deepened from -3.2% y/y in 4Q18 to -6.2% y/y in 1Q19. 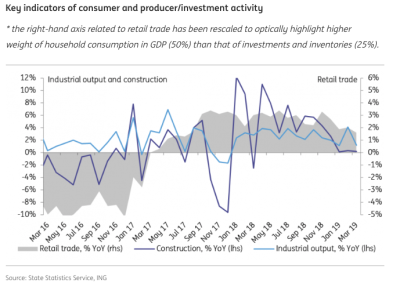 ...amid a 20% y/y drop in the state investment spending

Second, according to recently revised data, the budget was executed with a large RUB666bn (2.7% GDP) surplus in 1Q19, as the modest 6% y/y expenditure growth was significantly below the 18% y/y increase in non-oil revenues and lower than the 9% y/y spending growth budgeted by the Finance Ministry for the full year. The key drag on the budget spending is the 20% y/y drop in the spending on 'National economy', which represents the state investments and other support to the industries. 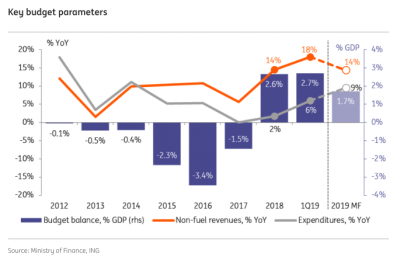 Overall, we take the weak GDP data as confirmation of our below-consensus 1.0% GDP growth expectations for 2019. Our current year-end key rate forecast is 7.25%, suggesting two 25 basis point cuts amid gradual CPI deceleration to 4.6%. We continue to believe that within the economic policy framework the budget policy is running a higher risk of easing than monetary policy.