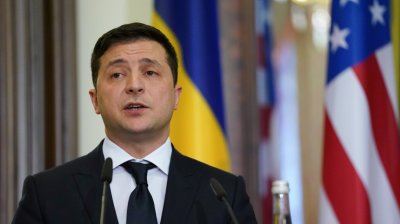 Zelenskiy's presidency seems to have gone off the tracks but no one is sure why? Is he simply out of his depth, is Ukraine unfixable, or he simply the puppet of oligarch Ihor Kolomoisky? / wiki
By Melinda Haring deputy director of the Eurasia Center at the Atlantic Council July 6, 2020

Poor Volodymyr Zelenskiy. In April 2019, the comedian-turned-presidential candidate won Ukraine’s highest office by a nearly three to one margin before trouncing the country’s established political parties a few months later in the parliamentary elections. His new party won so many seats that Zelenskiy held a majority in parliament. Now Zelenskiy faces a political future that is no laughing matter.

Zelenskiy was elected on three promises: to end the war in eastern Ukraine, to make the large Eastern European country of 42mn rich, and to stanch corruption. But after an initial burst of activity on the reform front, he ended up faltering on these pledges. The kettledrum rhetoric about fundamentally changing Ukraine has faded away to a faint pianissimo. Only a year in, he seems languid and defeated.

The shift isn’t just in tone; it’s also in substance and personnel. Zelenskiy sacked his reform-minded prime minister, most of his cabinet, prosecutor general, and many other top officials in March and April, stunning everyone. The timing couldn’t have been worse. The global coronavirus pandemic reached Ukraine a few weeks later and may well devour up to 8.2% of its GDP. Zelenskiy has hired flunkeys with little experience and even old Yanukovych cronies. At the same time, he is supporting politically motivated charges against the former president, prosecutor general, former infrastructure minister, and heads of the tax and customs services.

In May, the Ministry of Finance terminated the head of the independent supervisory board of the MGU, the independent company that oversees gas transmission. Historically, gas was the prime sector for self-enrichment, but that started to change in 2014. Zelenskiy’s move is a step back toward the bad old days of rampant defalcation, potentially paving the way to sacking the heads of the independent supervisory boards that govern Naftogaz, PrivatBank, and other important state-run companies. Goodbye, corporate governance—we hardly knew ye.

In July, the head of the National Bank of Ukraine resigned after a one-on-one meeting with Zelenskiy, citing political pressure. Tomas Fiala, the head of Dragon Capital, the top investment firm in Ukraine, said that he would suspend all future investments. “This is the last straw. One can only guess what the motives are. It is either complete incompetence or sabotage motivated by Russia,” Fiala wrote.

Herewith five theories to explain the radical, and often mercurial, shifts of the past year.

Servant of an Oligarch: Zelenskiy is a puppet of Ihor Kolomoisky. Kolomoisky, who owned the largest bank in country, PrivatBank, has been accused of looting the bank to the tune of $6bn before losing it in 2016. Now he’s doing everything he can in multiple courts in multiple countries to get the bank, or at least some of the cash, back. Zelenskiy and Kolomoisky certainly have a close relationship: Zelenskiy’s television show, in, which he goes from country bumpkin history teacher to president after a viral rant about corruption, was broadcast on Kolomoisky’s 1+1 television station. The oligarch also boosted Zelenskiy with positive media coverage well before the presidential election. The BBC’s Jonah Fisher asked Zelenskiy about his relationship with Kolomoisky during the campaign, and Zelenskiy said the oligarchs own all the major stations and the fact that his show is on Kolomoisky’s channel is no biggie. A year later, that statement strains credulity.

In his first year in office, Zelenskiy embraced the oligarchs. In September 2019, the presidential office released a grinning photo of the president, prime minister, chief of staff, and Kolomoisky in the president’s office. A few days later, Kolomoisky strode confidently through Ukraine’s toniest international conference, the Yalta European Strategy Summit, for the first time ever and gave interviews to all and sundry. Zelenskiy has done nothing to have Kolomoisky prosecuted, while his recently appointed prosecutor general has opened twenty-four criminal cases against his predecessor, Petro Poroshenko. Kolomoisky has about thirty MPs who are loyal to him within the president’s Servant of the People political party, and the oligarch has consistently harassed some of the officials that Zelenskiy just ousted.

Russian puppet: Long held by many members of the Ukrainian diaspora and nationalist types from western Ukraine, this idea rests on animus towards Zelenskiy. He’s not a native Ukrainian speaker, fails to denounce Russian President Vladimir Putin every chance he gets, and shows flexibility on efforts to make peace in eastern Ukraine. The theory has superficial appeal, but lacks supporting evidence beyond the circumstantial and, more importantly, fails to take the sheer incompetence in Kyiv into account.

Victim of his own inexperience: Report Advertisement Zelenskiy had a plan and he was defeated. Before 2019, he had never held a large administrative job and never served in government. Luckily for him, his first chief of staff, Andriy Bohdan, knew how to run the presidential administration and could whip parliament like no other. While Bohdan was in place, things worked in Kyiv. After Bohdan, things fell apart. According to sources in Kyiv, Zelenskiy listens to four friends who serve as chief of staff, senior advisors, and the head of the security services. None has any insight into economics or politics. When this trusted circle disagrees, Zelenskiy doesn’t know what to do. Insiders tell me that the president trusts no one, wants his people on every committee and board, has no ideology, and insists that everything must be done immediately. He can’t delegate. He ignores his own cabinet and deals directly with ministers and regional leaders. After the series of indefensible personnel decisions this spring, this theory looks increasingly likely.

Victim of his own naivete: Zelenskiy genuinely meant well and ran for president to fix the country. Before he ran for office, he was rich, famous, and hilarious. In other words, he didn’t need the job. He says he ran so that his kids could live in a normal country. According to former Prime Minister Oleksii Honcharuk,” Zelenskiy changed.” He told the Kyiv Post that the person he started working with and Zelenskiy today “are two different people.”

Of course, Zelenskiy sacked Honcharuk six months into the job, and the former prime minister’s retelling is likely self-serving. He says Zelenskiy was influenced by pro-Russian narratives that the West and George Soros are intent on destroying Ukraine, and that Zelenskiy started strong but couldn’t deal with the competing interests, the crisis, and the hard policy choices.

No match for the system: It’s impossible to change Ukraine. Everything is for sale, including parliamentarians. Name your price, and one can adopt a baby during COVID-19, illegally air-freight hundreds of dogs from a puppy mill to Canada, and do just about anything else. Oligarchs appear to have recovered their control over the parliament for a pittance, and all along they controlled the media and all the major industries. As the ruling oligarchs claim in Zelenskiy’s fictional hit series: “This bunch was much more affordable than the last one.” Until the role of money in Ukraine’s politics changes, it doesn’t matter who’s president. Ukraine’s modern history makes it impossible to summarily dismiss this theory.

One thing is clear: the show will go on in Ukraine, but whether Zelenskiy will be the starring act is another matter. Instead, in Kyiv, it increasingly looks like back to the future.

Melinda Haring is the deputy director of the Eurasia Center at the Atlantic Council. She tweets @melindaharing. This comment first appeared in The National Interst here.

Russia resumes oil supplies to Slovakia and Hungary but imports to Czechia remain halted
Poll shows every other Russian supports continuing the war against Ukraine
Ukraine will receive $5.5bn in support from the US later this month