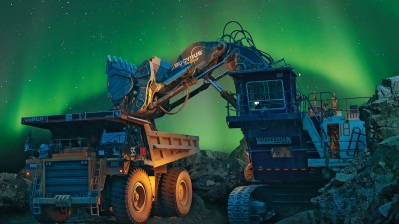 Belarus depends on Soviet-style huge state owned corporations, but these actually work and make things the country can sell like the MAZ truck pictured. After Lukashenko these enterprises need to be privatised but how can you do that without allowing the companies to be captured by oligarchs? / wiki
By Anders Aslund is a Swedish economist and a Senior Fellow at the Atlantic Council August 15, 2020

Whatever happens in Belarus, Alexander Lukashenko is not likely to stay president for long. Without him this obsolete Soviet-type economy is likely to be transformed. Three-quarters of this economy belongs to the public sector. Privatization will be the most important and difficult economic and political problem.

Any visitor to Belarus is surprised: this is not only the last Soviet economy, but it actually functions. Within the Soviet Union, Belarus always stood out as one of the most well-functioning and least corrupt republics, and that remains true. This highly industrialized economy is dominated by two scores of big state companies, mainly in heavy industry. They still produce Soviet products with soft budget constraints, but these are the best Soviet products you ever saw.

Belarus will need a program with the International Monetary Fund, but its macroeconomic problems are quite limited. Its inflation is under control at about 5%. The official budget deficit is tiny, and the total public debt is limited at 35% of GDP. One-fifth of the consumer prices are still regulated and there will be some inflationary pressure when they are liberalized, but Belarus have a strong central bank and ministry of finance. In general, the state administration is in good shape, probably the best in the former Soviet Union.

Yet, the Belarusian economy has been stagnant since 2012 and this heavily regulated Soviet-type economy can hardly grow much more. Most of these big state companies will need to be privatized to become efficient and competitive, but how can that be done? When communism was collapsing, privatization was very popular, because everybody wanted their share of the public wealth. After privatization had taken place, however, virtually all ministers of privatization were accused of embezzlement or worse. People generally like small private enterprises, but private ownership of big enterprises is barely not accepted. If large enterprises were sold early on in open auctions, they would be sold to wealthy crooks, the old elite, or foreigners for a song. If they were taken over by their old state enterprise managers, they tended to collapse. There seemed to be no way to get it right.

Belarus is surrounded by three deterring examples. In Russia, President Vladimir Putin has restored Kremlin control of the big companies, either directly through renationalization or indirectly by making sure that only loyal oligarchs own them. In Ukraine, a limited number of oligarchs maintain their control over the economy and the government. Ukraine still has more than 3,000 state-owned companies and it is extremely difficult to privatize them because each enterprise is controlled by some “shadow owner.” The oligarchs protect their profits by installing artificial monopolies in one way or the other. The economy grows little.

Until recently, Poland was a great economic success with many small and medium-sized enterprises, competitive markets, and high economic growth. In the last few years, however, Poland has been reversing. Big state companies in banking and energy have bought one successful big private company after the other, as the state decided to regain control. Poland had left too many big enterprises, notably in banking, mining, and energy, in state hand, and now Poland has a government that wants to utilize this for its own political good.

Where does this leave Belarus? Belarus has no big private businessmen or oligarchs. Its corruption is so far surprisingly limited. In the abyss between Scylla of too many big state enterprises and the Charybdis of oligarchic control.

The post-communist transition bears out three big lessons come. First of all, privatization is vital. Continued strong presence of state enterprises is likely to breed continued state control of the economy (as in Belarus) or a state revanche as in Russia and Poland.

Third, even if Belarus is not a captured oligarchic economy today, we cannot trust its rule of law. Then, corporate governance must not be too complicated. As soon as Belarus becomes free, it should focus on building up a normal judicial system before it becomes corrupt.

So how should Belarus go about privatization?

First of all, it should do whatever it can to develop a good judicial system with a decent rule of law, which no post-Soviet country has succeeded to do as yet. At the same time, it should adopt good laws on corporate governance before strong owner interests might distort them. Yet, a fair assumption is that governance will be poor for some time to come.

A common idea is that one should favour foreign direct investment (FDI), but the only businessmen likely to be interested would be Russian oligarchs, who love risk and know how to manage under difficult circumstances. Western investors, by contrast, are cautious and risk-averse. The list of prominent Russian companies already in place is long: Mobile TeleSystems (MTS) dominates in mobile phoning, all the big Russian banks are present: Alfa Bank, Gazprombank, Sberbank, VTB etc. The only significant Western bank is Raiffeisen’s Priorbank.

If Belarus would just open up to privatization through auctions or tenders, big Russian companies would take over, as has happened in Armenia. During Belarus’s financial crisis in 2011, they Russian wolves circled around their tentative victims. Suleiman Kerimov, the owner of the big Russian potash company Uralkali sanctioned by the US because of his close links to Putin, has long tried to take over Belaruskali. Rosneft and Lukoil have had their eyes on the two big oil refineries, Naftan and Mozyr.

We need to go back to the fundamental choices of privatization. Initial Public Offerings are only possible for a few companies of high value, typically in energy and transportation, and they will happen later. Open sales to anybody will result in Russian owners of pretty much everything, which would also mean substantial political dependence on Moscow.

To distribute vouchers to the whole population is hardly feasible today, and they would be bought up by Russian businessmen who know that technique. Also private Russian businessmen usually have to obey the Kremlin today. Last October, I visited Armenia and was sad to see the stifling monopolistic dominance of Russian state companies. Why doesn’t Armenia buy cheaper Iranian gas? Because Russia’s Gazprom owns its pipeline system, etc.

This leaves us with only one reasonable option: Give the enterprises to the workers. In order to avoid uncertain or collective ownership without responsibility. The best option seems to be to give away most enterprises as individual shares to their current employees.

What would happen next? Some people would try to buy these shares. They should be allowed to do so, because one of the lessons is that greatly dispersed ownership does not work well when corporate governance is poor, but perhaps such trades should be limited to Belarusian citizens for some time. Many excellent Belarusian executives have made great careers in Russian enterprises. Why not let them get some advantage in their homeland? Some of the big Belarusian companies will be able to adjust, while others are likely to close down, but the important thing is to get the product and capital markets going.

Fortunately, the World Bank and the European Bank for Reconstruction and Development (EBRD) are already well established in Belarus and they should be able to assist with all the necessary legislation for privatization and corporate governance.

Anders Åslund is a senior fellow at the Atlantic Council in Washington. His latest book is “Russia’s Crony Capitalism: The Path from Market Economy to Kleptocracy.”