The Baltic economies enjoyed rapid growth in 2006-2007, fuelled by external credit. Real estate was one of the main beneficiaries and boomed in all segments – construction, residential, commercial and development. Several real estate funds started just before or during the boom period and the Baltic market seemed like a new promised land for real estate investors at that time.

Following the 2008 financial crisis there was little doubt among experts and analysts that the Baltic countries’ fixed currency policy was history and devaluations unavoidable. But despite of lot of speculation and turmoil in the banking sector, devaluation was avoided; rather, internal devaluation was the pain inflicted. Rents more than halved in almost all segments and real estate prices decreased even more. Increasing vacancies and unfinished developments made things worse and just when there were the first signs of improvement in the Baltics in 2010, turmoil in Greece and the Eurozone appeared and the headwinds grew again.

However, since 2011 there has been a step-by-step recovery behind the scenes and the economies of the Baltic countries are among the fastest growers in Europe. Rents have stabilised and even started to increase in some segments, vacancies have normalised, new development is increasing, transaction volumes have increased ,and yields have dropped.

The Baltic countries are often considered as Central and Eastern European, post-Soviet economies, benchmarked for example with Poland, the Czech Republic, Bulgaria, Hungary and Romania. Real estate cycles are indeed similar, but not the market players. The vast majority of foreign investors in the Baltics are of Scandinavian origin, who consider the Baltics as an extension of their home market and Baltic real estate research is more often found together with Scandinavian markets rather than Central or Eastern Europe. The rent rates, vacancies and yields of Riga, Tallinn and Vilnius are compared to Stockholm, Copenhagen, Helsinki, Oslo, and even Gothenburg and Malmö. There are also a large number of Scandinavian companies doing business in the Baltics as an extension to their home market in, for example, retail, banking and logistics.

With the close connection of the Baltic markets to Scandinavia, there has been an expectation for yield compression to spread to there as well, but the yield gap has even widened. Real estate funds and other institutional investors outside Scandinavia were scared off during the crisis and it has taken time to get more attention from international investors for the Baltics. The relatively small size of the markets and geopolitical risk concerns following the Ukraine crisis have kept the Baltics off the radar screen, but there are signs international investors are starting to return. Last year there were some large newcomers in the market, eg. Partners Group’s acquisition of a portfolio of assets from Optima Real Estate Fund.

The Baltic economies are among the best performing in the Eurozone. Scandinavian banks are the major lenders in the Baltic real estate markets and financing is available for good assets at similar terms as in their home market. Add to this stable rents, normalised vacancies and an attractive yield premium of 2-3% above the Scandinavian market and you have a strong case for the Baltic market.

Of course, some yield premium is sure to remain due to the limited size of the markets and other risk factors, but benchmarking is well correlated with secondary cities in Sweden or to some extent even Helsinki outside central business district. The main challenge is and will remain the relatively low transaction volume and a lack of supply of A-class properties to meet institutional investor demand in the Baltics. 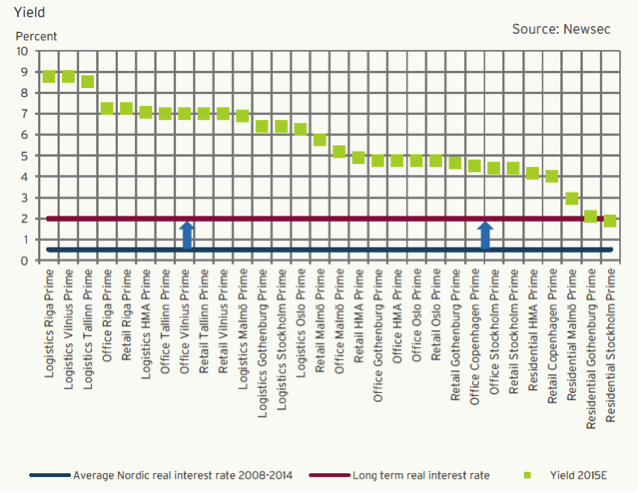