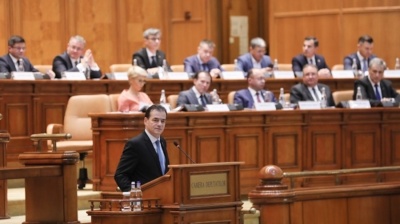 The cabinet proposed by prime minister-designate Dacian Ciolos, leader of the reformist party Save Romania Union (USR), failed to win lawmakers’ approval on October 20, one week after Ciolos was nominated by President Klaus Iohannis to form a government.

The outcome of the vote was largely predictable, as Ciolos failed to secure support from any of the other parties. Eventually, his cabinet was backed by 88 MPs (out of a total of 466), eight more than the number of USR MPs.

What is less predictable is the president’s next step.

Iohannis announced a second round of consultations with the parliamentary parties on October 21, at 11:00 local time. Unconfirmed rumours have circulated about Iohannis giving up plans to propose acting prime minister Florin Citu for another term, either as part of a new strategy or one forced by circumstances. This would result in a relatively quick restoration of the centre-right cabinet.

However, under the baseline scenario, Iohannis would still appoint his protege Citu, leader of the National Liberal Party (PNL) since September 25, for another term. But that scenario also says that Citu will fail to get lawmakers’ endorsement for another term as USR (the natural partner) specifically conditioned a coalition on another prime minister, and the Social Democrats have constantly criticised Citu.

This would lead to snap elections unless some special state of alert and constitutional tricks are used to keep Citu in office for a longer period of time.

A last-minute compromise could bring together PNL and PSD, in the form of a minority cabinet headed by Citu “for the sake of the people” given the pandemic circumstances.

This might be catastrophic for a Liberal Party that is already split between Citu and former leader Ludovic Orban.

Orban on October 20 in parliament openly urged Citu to resign from the head of the Liberal Party and open the door for the restoration of the centre-right coalition,  a statement that can be interpreted as a warning prior to the next step Orban would take if Citu sought support from the Social Democrats. Rumours about Orban setting up his own political vehicle have been in circulation for a while, but have been constantly denied by Orban.

US warns Belarus to keep its commitment to neutrality
54 minutes ago
US Secretary of State Blinken in Kyiv, warns Russia could attack “at very short notice”
2 hours ago
Defence agreement between Slovakia and the US divides politics and society
14 hours ago
Uzbekistan launches production of military drones
20 hours ago
New impetus between Bulgaria and North Macedonia at top-level Skopje meeting
1 day ago