Eight countries including three Central Asian economies and Montenegro are at rising risk of debt distress as they take out Chinese loans extended under the One Belt One Road Initiative (OBOR).

Adopted in 2017, the OBOR is a global initiative spanning three continents that aims to link China to Western Europe by reviving overland and maritime trade routes. Under the OBOR up to $8 trillion is planned to be invested into transport, energy, and telecommunications infrastructure across Asia, Africa and Europe.

However, a new study by the Washington-based think tank the Center for Global Development finds that of the 68 countries hosting OBOR-funded projects, 23 are currently at risk of debt distress, and in eight, future OBOR-related financing will “significantly add to the risk of debt distress”.

The eight countries most at risk include Kyrgyzstan, Mongolia and Tajikistan in Central Asia, as well as Montenegro, and four other economies — Djibouti, Laos PDR, the Maldives and Pakistan. All of these countries have been the recipients of large amounts of funding for infrastructure projects and as a result the proportion of external debt that is owed to China and its banks will rise, sometimes dramatically, says the report published on March 4.

“[I]mportant questions arise on sustainable financing of the initiative within OBOR countries, and how the Chinese government will position itself on debt sustainability. Infrastructure financing, which often entails lending to sovereigns or the use of a sovereign guarantee, can create challenges for sovereign debt sustainability,” write the report’s authors.

“It remains unclear the degree to which OBOR, a Chinese-led bilateral initiative that seeks to employ some multilateral mechanisms to achieve its financing goals, will be guided by multilateral standards on debt sustainability.”

“Our research makes clear that China needs to adopt standards and improve its debt practices – and soon,” said Scott Morris, a senior fellow at the Center for Global Development and a coauthor of the paper.

Specifically, there are concerns that the sheer volume of debt that some countries involved in the OBOR will owe to China will leave countries with debt “overhangs” that will “impede sound public investment and economic growth more generally”. The political implications of increased dependence on Chinese credit are also a concern; tensions are already evident for example in Sri Lanka, where activists clashed with police over the new industrial zone at Hambantota port.

Yet these concerns have often been ignored given the large and growing need for infrastructure investment in many countries around the world. The Asian Development Bank (ADB) has estimated an infrastructure gap — the difference between the amount being spent on infrastructure and the amount that’s needed to keep up with demand — of up to $1.7 trillion per year in Asia. A separate report by the Global Infrastructure Hub, a G20 initiative, shows that the four regional economic hubs in the CEE/CIS region — Russia, Kazakhstan, Turkey and Poland — are facing a combined infrastructure gap of $1.307 trillion over the next 23 years.

“Belt and Road provides something that countries desperately want – financing for infrastructure … But when it comes to this type of lending, there can be too much of a good thing,” said John Hurley, a visiting fellow at the Center for Global Development and a coauthor of the study.

Chinese state controlled banks have also been more amenable to funding, for example, coal-fired power plants and other projects that are increasingly shunned by international development banks on environmental grounds. In the Western Balkans, the plethora of new coal power plants in the works are almost invariably backed by Chinese banks and planned to be built by Chinese engineering firms.

The Center for Global Development study looks at the 23 countries currently at risk of debt distress and incorporates the OBOR lending pipeline into each country’s debt as of the end of 2016 to estimate which are likely to suffer from debt distress as a result. 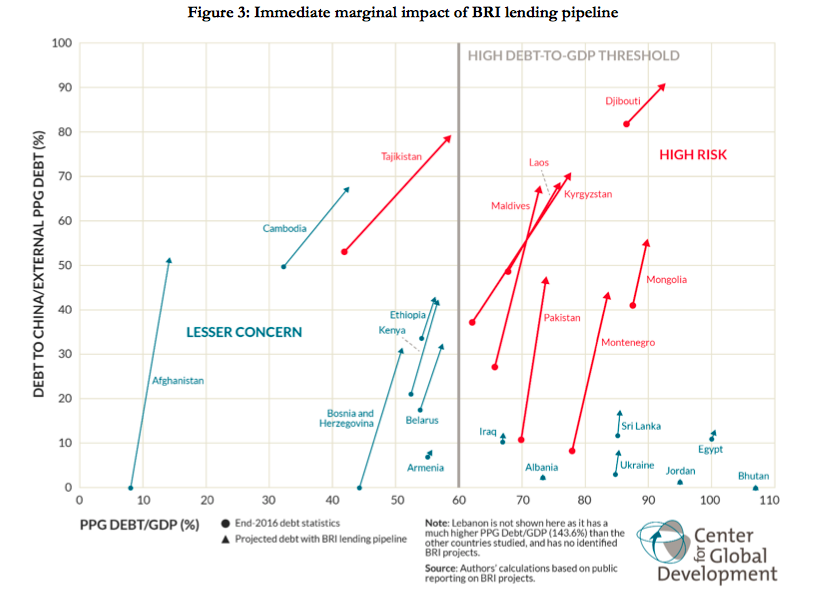 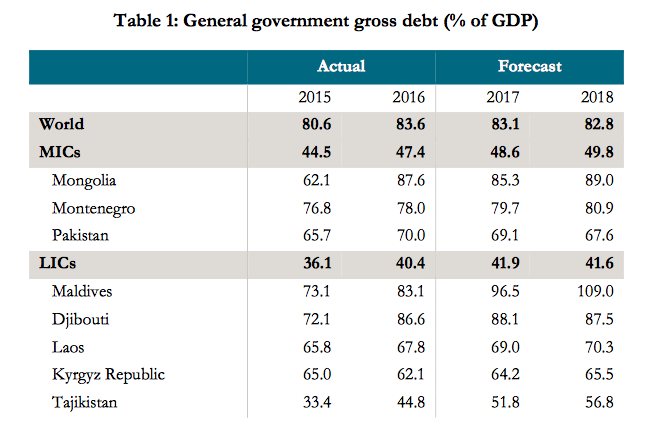 In the two lower income CEE/CIS countries included in the report — Kyrgyzstan and Tajikistan — the levels of debt as a percentage of GDP are forecast to be lower this year at 65.5% and 56.8% respectively. However, the two countries are less able to cope with increased debt burdens than their more affluent peers, and Tajikistan’s debt is increasing dramatically, rising from just 33.4% of GDP in 2015 to an expected 56.8% in 2018. China is Tajikistan’s single largest creditor and accounts for almost 80% of the increase in the country’s external debt between 2007 and 2016, though Dushanbe more recently tapped international markets with its debut $500mn Eurobond in 2017.

As one of China’s neighbours, Tajikistan is considered the “first leg” of some overland OBOR projects, most importantly the Central Asia-China gas pipeline (Line D). While the future of this $3bn project was thought to be in doubt, in January Tajikistan’s energy minister confirmed work had resumed on the Tajik stretch of the pipeline.

“One of the poorest countries in Asia, [Tajikistan] is assessed by the IMF and World Bank to have a “high risk” of debt distress. Despite this, it is planning to increase its external debt, both at concessional and non-concessional rates, to pay for infrastructure investments in the power and transportation sectors, including those elements supporting OBOR,” stresses the report.

Kyrgyzstan, which also borders China, is in a similar position, with a broad range of new Chinese funded infrastructure projects currently under discussion in addition to the gas pipeline, from the construction of a chain of hydropower plants, to the China-Kyrgyzstan-Uzbekistan railway and new roads. According to the report, “While currently considered to be at a “moderate” risk of debt distress, Kyrgyzstan remains vulnerable to shocks resulting from a sizeable exchange rate depreciation exacerbated by the scaling up of public investments.”

Sandwiched between China and Russia, Mongolia is in a “particularly difficult position” says the report, citing the need for large infrastructure investments to increase productivity and facilitate exports. “[I]f reports that Beijing expects to channel some $30bn in credit to OBOR-related projects over the next five to ten years are true, then the prospect of a Mongolia default is extremely high, regardless of the concessional nature of the financing.”

Thousands of kilometres away on the Adriatic coast, tiny Montenegro also has an “enormous” debt problem. At the heart of this is the Bar-Boljare motorway project, which will link the country’s main port to the Serbian transport network. The highway is estimated to be the most expensive road per kilometre in Europe because of Montenegro’s mountainous terrain, and is being funded almost entirely by a €689mn loan from China Exim Bank. Despite the burden this will place on Montenegro’s finances, the government is reportedly considering additional Chinese funding for a controversial project to expand the Pljevlja power plant after a deal with the Czech Export Bank fell through in 2016.

Other countries from the region, in particular Belarus — whose President Alexander Lukashenko said last year there is “probably no country in Europe closer to China” — and Bosnia & Herzegovina as the site of several potentially Chinese funded power plants, are also set to see a hike in debt as BRI related projects get underway. However, according to the Center for Global Development report, total public debt should remain low enough to mitigate the likelihood of default.