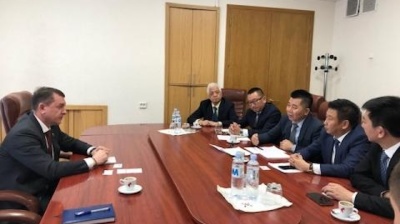 Officials from Moldova’s ministry of economy discussed plans to invest in the Moldovan air transportation sector with representatives of the Sichuan Ruifeng Investment Management Group (China) on May 2. Talks focussed on Marculesti airport located in the northern part of the country, 150km from Chisinau.

The airport, a former military base, was planned to be converted into a free economic zone back in 2008, but it was only transferred from the ministry of defence to the ministry of economy last year.

The airport has a wide runway, which can receive planes of any type, including large military transport aircraft such as Russian AN-124s and Boeing C-17s.

According to the ministry’s statement, Economy Minister Vitalie Iurcu informed the Chinese delegation that Marculesti international airport, due to its geographical position, has the potential to become a very important centre contributing to the exchange of goods between Europe, Asia, Africa and the Middle East. He also outlined the Moldovan government’s support for foreign investors.

The president of the Wang Dong company confirmed his readiness to invest in Moldova and develop a sustainable partnership, according to the statement.

Marculesti international free airport was founded in 2004 at a former Soviet military unit. Its has an area of 265.2 hectares.

In 2008, the parliament adopted a law on creating a Free Economic Zone (FEZ) at the airport. In October 2010, within the Transport Corridor Europe-Caucasus-Asia (TRACECA) project, a business plan was presented in Brussels for creating an international logistics centre in Marculesti. It was planned that in the first stage in 2012-2014 investments would reach €10mn, in the second stage in 2015-2018 – €4mn, and in the third stage in 2019-2022 – €2.7mn. Some of the funds would have been used to instal proper lighting for night flights, to repair the runways, refurbish the airport, buy 10 new planes and open a training school for pilots.

It was also supposed that Marculesti would be a reserve airport, which would be able to receive planes in case of unfavourable weather conditions in Chisinau, in order to avoid landing in Romania (Iasi or Bucharest) or Ukraine (Odesa).

Avia Invest, the company that operates the international airport in Chisinau under concession, has promised to pay all its debts and furthermore invest €170mn in the planned new terminal, ... more

Moldova’s central bank, the BNM, cut the refinancing rate by 1pp to 4.5% on March 4, citing disinflation risks posed by the global Covid-19 coronavirus outbreak. The decision to ease monetary ... more