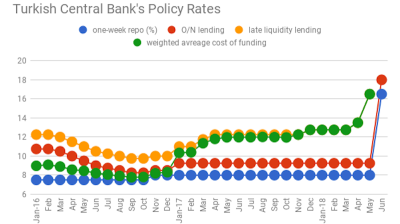 The ailing Turkish lira (TRY) went on a charge on May 28 after Turkey’s central bank announced it would return to the one-week repo rate as its main policy tool, and do away with its complex process of using four rates.

With the rate hike not having made the impact hoped for by some observers, the central bank has pursued several other measures designed to boost the lira. On May 24 it raised the total maximum amount of forward FX sales to $8bn from the previous $6.5bn, while on  May 25, it announced that repayments of rediscount credits for export and foreign exchange earning services, due by July 31, can be made in Turkish lira at a fixed exchange rate of 4.2000 to the USD, 4.9000 to the euro, and 5.6000 to the pound sterling.

The Central Bank of the Republic of Turkey (CBRT) has for years relied on multiple rates to set policy, something which economists say has made its monetary policy less predictable. Most recently, it has been funding through its late liquidity window rate. Under the changes, the regulator is from June 1 to set its one-week repo rate—previously its main policy tool—at 16.5% and use it as the main rate.

“The CBRT has decided to complete the simplification process regarding the operational framework of monetary policy,” the central bank said in a statement. The regulator added that the overnight borrowing and lending rates will be determined at 150bp below and above the one-week repo rate. The late liquidity window rate is already at 16.5% following last week’s interim rate increase.

By funding lenders at the late liquidity window rate, the central bank has actually been punishing lenders unable to manage their cash position within market hours.

“We think conducting funding through a single rate, the weekly repo rate, has increased predictability and sends a powerful signal to the markets that the tight stance will continue,” Is Investment economist Muammer Komurcuoglu told Reuters.

The move from a “complicated monetary policy" that included inactive interest rates in the funding mechanism to a “more understandable policy" is highly positive for foreign investors, Garanti Securities chief economist Nihan Ziya-Erdem said in a report.

In a further effort to reassure the markets that Turkey retains its independent monetary policy and is capable of overcoming its devaluation crisis and avoiding a currency-and-debt crisis, Deputy Prime Minister Mehmet Simsek, who is in charge of the government’s economic team, and CBRT governor Murat Cetinkaya, were to hold investor meetings in London on May 28 and May 29 after meeting with domestic market players in Turkey on May 27.

The two officials are obviously trying to rebuild the credibility of Turkey’s economic policy which was so badly undermined by Erdogan’s Bloomberg TV interview in London on May 14. During the interview, the president said he planned to tighten his grip on the economy and assume a greater role in setting monetary policy if he is kept in power and made executive president by the June 24 snap election.