CENTRAL ASIAN BLOG: Turkmenistan boxes itself into a corner 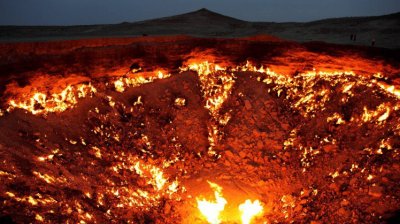 Turkmenistan has the world’s fourth largest reserves of natural gas, but hardly any viable pipeline options to get supplies to market.
By Will Conroy in Prague January 16, 2017

Turkmenistan’s surprise suspension of gas supplies to Iran has refocused attention on the landlocked country’s plight when it comes to finding breakout routes for its only significant export commodity.

The country has the world’s fourth largest reserves of natural gas, but hardly any viable pipeline options to get supplies to market. It faces Russian obstruction in both the north and west, the ‘minefield’ that is Afghanistan to the southeast and now a standoff with Iran to the south, leaving only the eastern route to China. And even in that direction there is trouble, with the Chinese demanding bargain basement prices in a buyer’s market.

Turkmenistan’s decision to cut off its gas flows to northern Iranian provinces not yet well integrated into Iran’s well-fed national gas network has caused some puzzlement among analysts.

Ashgabat has long insisted the Iranians owe Turkmenistan $1.8bn in unpaid arrears for historic gas deliveries dating back a decade or more (Tehran puts the likely figure at somewhere between $600m and $1.5bn).

At the end of last year the two sides seemed to be intent on finding a way forward despite unresolved tensions. Iranian oil minister Bijan Namdar Zanganeh was quoted by the Tehran media as saying Turkmenistan had agreed to extend the rolling gas exports deal for northern Iran. Mehr News Agency, meanwhile, depicted the Turkmens as farcically desperate. It cited Iranian officials who claimed a deal was only done after Turkmengaz representatives pleaded with them at the airport to return to the negotiating table.

The sudden closing of the spigots on January 1 thus left observers bemused. With Turkmengaz refusing to comment, the National Iranian Gas Company (NIGC), which is taking the dispute to international arbitration, expressed outrage, stating: "Turkmengaz suddenly and... in an illogical manner, contradictory to the agreement, halted gas deliveries to Iran this morning, demanding quick payment of the disputed amount."

So - given Turkmenistan is still apparently holding out some hope that Iran might one day allow it to ship gas volumes to Europe via Turkey, while Iran’s northern provinces are unlikely to need Turkmen gas for much longer given the accelerating exploitation of huge Iranian gas reserves - what’s with the hardball?

Natalia Konarzewska, a freelance expert and analyst with a focus on political and economic developments in the post-Soviet space, described the Turkmen move as most likely a “desperate” attempt at blackmail amid the country’s prolonged economic woes, adding: “This manoeuvre could eventually backfire on Turkmenistan because it might potentially alienate one of the two clients left for its gas. But the situation with gas transmission in Iran's northern parts is not that simple; they apparently needed an emergency plan to boost transmission capacity [after the cut-off].”

Turkmenistan is in something of a limbo when it comes to gas export routes, with little leverage over clients or potential clients, said Konarzewska. She said reports indicated that volume growth in Turkmen gas exports to China was dropping off, with Beijing having access to alternative suppliers, while Moscow, which stopped accepting Turkmen gas early last year, would continue to block any potential gas flows from Turkmenistan to Europe via Azerbaijan by refusing to agree a legal status for the Caspian Basin and perhaps by threatening pipeline security in the South Caucasus.

“Russia's growing military posture in the Black Sea could potentially block any undersea energy projects, which could reach southeastern and central parts of Europe most dependent on Russian gas deliveries,” she observed.

Looking at the Iran route, the analyst only foresaw “Tehran possibly agreeing the transfer of small Turkmen gas volumes in order to receive EU funding for developing its own energy infrastructure”.

But Turkmenistan, which NIGC says accounts for just 3% of Iran’s gas supplies, is unlikely to entirely give up on its ambition to somehow get its gas to Europe. After all, as Konarzewska noted, in late December 2015 the Turkmen announced the completion of the East-West 30bn cubic metre per year gas pipeline, a 773-kilometre route connecting eastern Turkmenistan gas fields with the Caspian Sea coast.

Dmitry Shlapentokh, an associate professor of world, Soviet and post-Soviet history at Indiana University South Bend, sees things a little differently. “I think Turkmenistan has indeed decided to drop the Iranian routes which looked quite promising, [even though] an attempt at sending gas via the Caspian Sea would face strong Russian resistance or threats,” he said.

Reaching the Pakistani and Indian markets through Afghanistan remained rather questionable, Shlapentokh contended, even though “some Taliban claim they would not create problems”. He added: “No-one knows the Talibans’ plans for sure, they are also divided and the ISIS presence cannot be discarded. It looks like China is the only option. China is the major beneficiary of all of these Turkmen problems.”

Many Iranians clearly have little sympathy for the Turkmen, claiming the contested gas bill largely relates to the harsh winter of 2007-08. As recalled by Iranian state media website presstv.ir, Turkmenistan “pounced” to cut off gas supplies to Iran during that winter, claiming the move was down to repair work. At the time, gas price talks were under way. Iran had been paying just a few dozen dollars per 1,000 cubic metres but “Turkmenistan demanded - and got - $360 per 1,000 cubic meters during that period… of severe gas shortages in a freezing winter across 20 Iranian provinces,” the website added.

Ruslan Tuhbatullin, co-editor of the expatriate Chronicles of Turkmenistan news website – an information resource of The Turkmen Initiative for Human Rights (TIHR) – said in an email that more criticism should be directed at Iran in the dispute: “Iranian news agencies started lashing out at Turkmenistan at the end of December, blaming Ashgabat for Turkmengaz ‘using harsh winter conditions to their advantage’ and so on. I'm absolutely sure the Turkmen side was surprised by this behaviour.”

Tuhbatullin added that he believed the Turkmen government, which over a long period had painstakingly pressed Tehran to pay off the gas debt, “didn't have any [evil] plan, the first step of which was cutting gas supplies to Iran. They never act proactively, they are always reacting to a situation and they always are very straightforward and predictable. I'd rather not ask ‘What motivated Turkmenistan to cut exports to Iran?’ but rather ‘What motivated Iran to provoke Turkmenistan to undertake such measures?’”

Alas, sympathy elsewhere for the Turkmen seems in rather short supply. Things are perhaps best summed up by a closing line of an entry on the Sifting the Karum blog posted last year. After assessing Turkmenistan’s fast-dwindling number of gas export options, and decrying how the country is being “badly pinched” by the prices paid by China, the anonymous author concluded: “Ashgabat has through the fault of its own diplomatic lethargy contrived to box itself into a corner and there is no guarantee any number of urgent, high-level encounters will be able to yield useful results any time soon.”