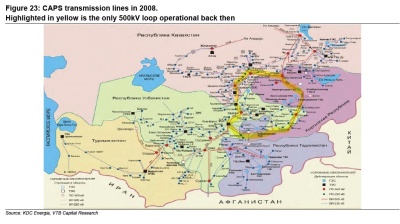 Central Asia needs more 500kV loops in order to share power between the countries of the region.
By Ben Aris in Berlin October 21, 2019

Central Asia’s power grid, set up by the Soviets in the 1980s, was conceived as a centralised network that could supply the whole region with electricity. However, the fall of the USSR in 1991 left all the countries connected to the grid with some major headaches.

The first problem arose with the arrival of all the new national borders. For Soviet planners, the borders were merely administrative lines on the map, thus they designed the system on the basis of who actually had the power resources and distributed the power stations rationally across the whole region—not with a focus on supplying each country with enough power resources for its own population.

While the Central Asian Power System (CAPS) was connected to the rest of the Soviet Union, it was designed to be largely self-sufficient. Most importantly, it had a centralised dispatcher that controlled power flows across the whole region. The fall of the Soviet Union also meant the end of the central dispatcher. All the countries in the region scrambled to remake their grids along national lines.

Now that the economies have stabilised and relations in the region are improving, all the countries are slowly coming back to the idea of establishing a pan-region energy grid and cooperating. Petr Grishin, head of macro-research at VTB Capital, dived into the details in a recent report, extracts of which are below.

Links in the loops

The power system was supposed to be largely able to cater to the overall energy needs. Although a part of the pan-USSR unified energy system, its external interface with the other components was weak. This remains the case now – via the Kazakhstani transmission system (KEGOC), CAPS works in a parallel mode with the Unified Energy System of Russia.

Yet links between the north of Kazakhstan (N-KZ) and S-KZ were until 2018 lacking transmission capacity and, despite recent strengthening, bottlenecks remain. S-KZ is itself an energy-deficient region, and the new S-KZ to N-KZ link is mostly used for the intra-KZ redistribution of power.

In the past two decades, power demand in the region has grown rapidly – chiefly as a result of population growth – yet capacity additions have lagged. CAPS was, and remains, overall energy-deficient.

However, there was supposed to be a strong internal cohesion within CAPS. The location of generation assets disregarded intra- USSR borders; to link consumers and producers, inter-republic (now international) transmission lines to deliver energy to demand centres were built.

It made sense back then: given difficult terrains and mountainous landscapes, it was cheaper, and people did not think much of the borders, which were purely administrative. When viewed from the contemporary sovereign states angle, that means that the entry point into independence was subprime: in UZ, the centre was energy-excessive, with the Samarkand-Bukhara region energy deficient, as was the Fergana Valley; in both KZ and TJ, the south was tagged as energy-excessive, with the north deficient. Deficient areas were now supplied across new national borders.

Cohesion in CAPS was meant to be strong, and it was reflected in how generation was geographically located versus consumption centres. Yet in practice, the USSR never managed to get the connection between the centres – via the grid – strong enough to ensure robust integration in practice.

There are two methods to ensure the reliability of integrated systems: either to follow i) the ‘N-1 Principle’, which requires that a contingency event in any one element of the grid does not disrupt power supply to consumers; or ii) ensure the quick recovery of a balance between generation and consumption (and frequency, 50Hz in this part of the world), via a system of automatic switchers (PA).

Following the N-1 principle was considered impractical as there was no excess generation capacity and hence no need to have much in the way of reserve transmission lines. By the time the USSR was dissolved, there was just one 500kV ring in the CAPS topology.

The PA was the route to protect the system, and remains so. This, together with bottlenecks in the N-KZ – S-KZ link and overall energy deficiency, made any large imbalance in one republic (now country) lead to blackouts in other ones. True, it also excluded the catastrophic pan-CAPS outages, but it made smaller-size imbalances propagate throughout adjacent territories. If something went wrong in one country, consumers and producers were affected in others.

There is a clear distinction between energy endowments. KZ, UZ and TM are rich in fossil fuel and have only a limited hydro potential, whereas TJ and KG have the reverse mixture.

Geography also creates an extreme form of dependence on hydrological conditions: both the Naryn (one of the Syr-Darya sources) in KZ and the Vakhsh (predecessor to Amu-Darya) in TJ are mountainous rivers fed by the melting of the glaciers. If the natural flow is not regulated and only run-of-river (ROR, without creating reservoirs) HPPs are built, their firm capacity will be severely restricted (way below the nameplate) in months of low water. Thermal-based generation does not have this seasonality.

Economically, a great advantage of fossil fuels as an energy medium, versus water and electricity, is that they are internationally tradable. One can refer to ‘global coal prices’, and that would be meaningful – corrected for transportation costs, there is a global market for coal. There is nothing comparable for electricity, let alone water.

There is also a sharp differentiation as to the preeminent water usage of the Amu-Darya and the Syr-Darya – the two great rivers of Central Asia connecting all five countries.

There are upriver countries (TJ and KG), for which water means first of all energy, and down-river ones (KZ, UZ and TM), for which water means irrigation. Up-river countries’ decisions on how much water to discharge via dams do not interfere with their agriculture, but the very same decisions made upriver do matter for down-river ones: a week of low water in the Amu-Darya’s middle reaches can kill an entire harvest.

Unlike fossil fuels, where ownership between countries is clearly delineated, water moves – and, except for historical precedent, there is nothing ‘natural’ in how the water use rights should be ‘divided’ between the countries along the same river. Energy decisions are intimately intertwined with water usage ones – both in terms of volume across the year and timing of discharge within the year.

On top of the differences highlighted previously I this text, the sizes of the national energy systems also matter. With UZ being the largest in the region in terms of installed capacity, and TJ the smallest, the benefits of working in a parallel regime are distributed asymmetrically, as are the countries’ roles in the CAPS dispatch. HPPs have a much smaller lead time to start/stop generation, and so it was mainly TJ (Nurek HPP) and KG (Toktogul HPP) that were used as major balancing producers to deal with intra-day spikes in consumption patterns in large cities such as Tashkent, the UZ capital. 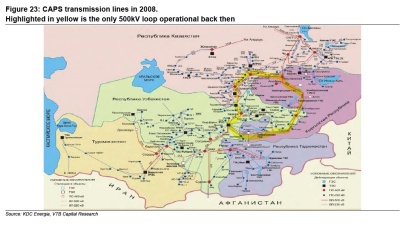 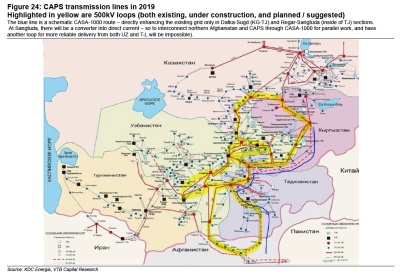 Who needs a war?
14 hours ago
Outbreak of calm grips Ukraine
14 hours ago
Primark to launch in Romania as it pursues CEE expansion
21 hours ago
All eyes fall on Nazarbayev clan’s extraordinary wealth as Kazakhstan’s Tokayev asserts authority by targeting super rich
1 day ago
UniCredit's hopes of acquiring Russia's Otkritie Bank marred by geopolitical tensions
4 days ago