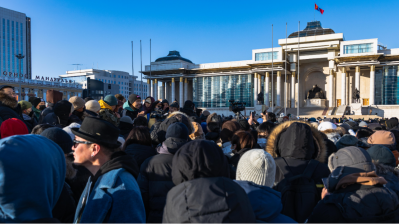 The end of last year saw Mongolians pour on to the streets of Ulaanbaatar to register their outrage at the loss of billions of dollars in state funds to a coal mafia that embezzled funds on stolen coal exports. / Anand Tumurtogoo
By Anand Tumurtogoo in Ulaanbaatar January 4, 2023

Mongolians welcomed in the new year amid an atmosphere thick with disapproval of the government, as officials struggled to extricate themselves from the highly damaging coal mafia affair.

Every year, Mongolia's leaders, including the prime minister, speaker of parliament and president, toast accomplishments of the year gone by and offer best wishes for the coming year. It is mostly a restrained, matter-of-fact affair, with the leaders promising the Mongolian people a brighter future. But this time round, something felt off—the public dissatisfaction with the ruling politicians was all too palpable.

A couple of days earlier, on December 29, when the traditional presidential wrestling event was held, crowds booed the PM, president and speaker during their opening words. One prize winner did not bow to the president. The audience took that as the wrestler expressing his disapproval of the head of state, Khurelsukh Ukhnaa.

On new year’s eve, when the trio of leaders gave televised speeches, people posted videos on Facebook of themselves turning off their TV sets during the programme and plainly stating, "Liars."

Khurelsukh said in his presidential speech that the coming 12 months would be challenging given global events such as the war in Ukraine and inflation. He went on to say that this year would be a year for young people to fight to bring about a just society, and that there is a need for the parliament and government to immediately create a legal environment for the people to own appropriate shares of natural resources and directly benefit from them (the fact that the coal mafia appear to have pocketed billions of dollars that should have made it to the state coffers tends to suggest he’s got that right). "Owning a country entails owning its natural resources," said Khurelsukh.

Reflecting on 2022, the president talked about how the government had retrieved stolen public businesses, revoked more than 30 mining licences and given some territories protected area status.

The president acknowledging public dissatisfaction demonstrates that he understands the public's displeasure. However, his words on how the government has revoked permits for private business operations could be taken as a sign that the government is overstepping boundaries with little to show for it for the time being.

All of this came on the heels of the December coal theft protests. The scandal sparked public outrage over unlivable conditions in Monoglia, particularly in the capital city of Ulaanbaatar. The streets resounded with loud demands for the names of all the officials involved in the coal export earnings heist. The biggest protest went on for more than 10 days, but only a few people slept outside in the subzero cold for long periods of time. On December 21, law enforcement moved in and arrested the remaining protesters, saying that they needed medical care.

The government has attempted to make some amends by revealing a certain amount of previously classified information on the coal and coal proceeds theft, which implicated major coal mining company Erdenes Tavan Tolgoi. The Independent Authority Against Corruption (IAAC) named 17 high-ranking past and present government officials under investigation for involvement in the affair, including former president Battulga Khaltmaa. Shortly after he was named, Battulga left Mongolia for South Korea on December 16, citing medical reasons. The government, meanwhile, has hinted that there could be snap parliamentary elections in 2023, instead of the scheduled 2024 polls.

But these constellations of half-actions don’t produce the large-scale reforms that would help right the current state of the country in any meaningful way. The disclosing of a few pieces of information will not undo the government’s draconian methods of hiding once readily available information from the public.

Since 2017, when parliamentary laws were changed so that only the government can decide what should be kept secret, the government has become more and more closed. As for a snap election, the ruling party does not currently face a true opposition. It would almost certainly win office again. That could spark even larger and more violent protests. Unless the election laws are changed to make election expenditure public, a snap election will not result in enough favourable change.

We are at a watershed moment in Mongolian politics. The legislators can either move toward a more democratic and open society or they can become more detached. The latter outcome might not benefit Mongolians, but it would perhaps please neighbouring China and Russia.