Capital flight from Russia triples y/y to $42.2bn in January-October 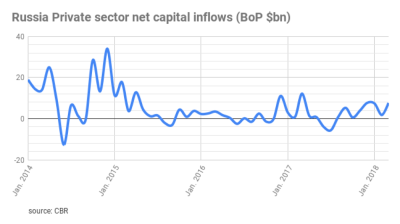 Capital flight from Russia is on couse to end this year at $66bn, third worst year in a decade / bne IntelliNews
By bne IntelliNews November 13, 2018

The net outflow of capital from Russia in January-October 2018 was up to $42.2bn, a three-fold increase from the $14bn that left Russia in the same period a year earlier, according to preliminary estimates from Central Bank of Russia (CBR), it was reported on November 12.

Approximately half of this amount is accounted for by operations of banks to repay external liabilities, the other half is due to business purchases of foreign financial assets. A quirk of Russian national accounts is that any money reinvested in the foreign businesses of foreign-based companies owned by Russian entities is counted as capital flight.

Earlier, the central bank reported that net capital outflow in January-September amounted to $31.9bn, suggesting that in October alone capital flight jumped to $10.3bn in the month.

The central bank is forecasting total capital flight will end the year at $66bn, based on the assumption of an average annual oil price of $72 per barrel, although this will fall to $25bn in 2019.

Even though the outflows are painful, in terms of a share of GDP capital flight has fallen steadily from the 12.6% in 2014 – the worst year on record – to 4.1% this year assuming a $66bn outflow.

The Russian Ministry of Economic Development is more optimistic, forecasting in September annual capital outflow of $41bn for this year, or 2.5% of GDP.

Capital flight has been increasing in the last few years as the sanctions battle with the US becomes more intense. In 2017, the net outflow of capital from Russia increased 1.6 times y/y to $31.3bn.

The positive balance of payments made it possible to continue accumulating international reserves and increase them by $35.7bn so far this year, despite the capital outflows, mainly due to the acquisition of foreign currency according to the budget rule for additional oil and gas revenues.

Hungary’s economy expanded 6.5% y/y in Q2, according to both adjusted and raw data, slowing down from 8.2% in the previous quarter.

Governments in several counties across Emerging Europe have launched pro-natal policies where parents receive financial benefits and tax breaks for having more babies.

Latvian unemployment rate at 6.6% in 2Q
20 hours ago
Polish economy in much sharper downturn than expected, Q2 GDP data show
20 hours ago
Russia’s EconMin seen as overly optimistic with another GDP upgrade
21 hours ago
Hungary’s economy pulls off robust growth in Q2, but outlook clouded
21 hours ago
Emerging Europe governments paying parents to have babies to stem population decline
1 day ago