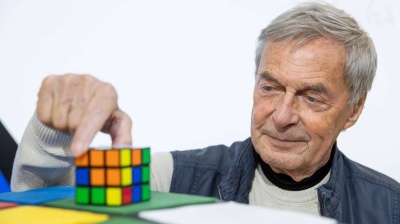 The Rubik Cube, invented by Erno Rubik has become one of the best-selling toys of all times.
By Tamas Szilagyi in Budapest October 28, 2020

Canadian toymaker Spin Master has entered into an agreement to acquire Rubik's Brand Ltd, owner of the iconic Rubik's Cube invented by Hungarian architect-designer Erno Rubik in 1975 and brought to the market five years later.

The Canadian company is paying $50mn to Rubik's Brand Limited, a London-based company owned by David Lytton Kremer, the son of Tom Kremer, who has interests in several other toy companies.

Tom Kremer, 90, a games designer, entrepreneur and publisher, met Rubik in 1979 and worked with him to popularise the game on a global scale. To date, over 350mn Rubik's Cubes have been sold, making it one of the best-selling toys of all time.

Users can twist and turn the cube and the goal is to return to its every side having one solid colour. The original 3x3 cube offers 3 quintillion possible moves. The STEM-accredited puzzle supports brain development and cognitive skills

"The Rubik’s Cube is an iconic puzzle that has permeated pop culture and captivated fans for more than 40 years," Spin Master vice-president Elizabeth LoVecchio said in a statement.

Founded in 1994, the Canadian company is one of the largest players in the gaming industry. It generated $1.58bn in revenue last year. The latest transaction marks the company’s 22nd acquisition since its foundation and 12th since its IPO in 2015. The transaction is expected to close on January 4, 2021.

Erno Rubik said in the statement that he’s excited that Spin Master will "fulfill my vision of nurturing smarter, future generations through play."

It is not yet known to what extent the 76-year-old Hungarian inventor will benefit from the transaction.