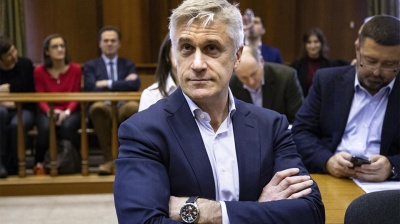 Russia's most famous fund manager Michael Calvey has been found guilty in an embezzlement case, although the judge put off passing sentence. Prosecutors have asked for a six-year suspended sentence. / wiki
By bne IntelliNews August 5, 2021

The judge in the Moscow district court found Calvey and his associates guilty and will deliver the sentence later. Prosecutors have asked for suspended prison terms of between four and six years for each of them.

Calvey was arrested in February 2019 in what his firm Baring Vostok claims was a corporate dispute with its former partner and shareholder in Vostochny bank.

Prosecutors accused Calvey and several other employees of the fund of embezzling RUB2.5bn ($37.5mn) by persuading Vostochny bank shareholders to approve a share sale at an unrealistically low price. Calvey presented ample evidence in court to show that these arrangements were simply part of normal business practices that were related to debt transactions of the bank. In summing up the case even the judge admitted that no concrete evidence of Calvey’s guilt had been presented. But in Russia some 99% of cases that go to trial end in a conviction.

Investors, especially private equity investors, have been watching the case closely. Calvey and Baring Vostok have been responsible for bringing billions of dollars into Russia and made a string of “homeruns,” Calvey told bne IntelliNews in previous interviews, that earned investors billions of dollars in returns. Baring Vostok dominates the private equity business in Russia and scoops up the lion’s share of capital made available by funds doing private equity investments in the country.

Calvey’s arrest caused a shock to both international investors but also senior Russia officials, among whom Calvey is well-known and respected. Several prominent Russian officials stuck their necks out and called for the case against Calvey to be dropped to no effect.

Putin’s business rights ombudsman, Boris Titov, told Bloomberg News that Calvey “is innocent” and there are “no grounds” for the criminal case against him.

However, their appeals may have had some effect, as the prospectors softened their demands for jail time and have proposed a suspended sentence as the most appropriate which would mean Calvey would not serve any time in prison.

Calvey consistently rejected as “totally baseless” the charges against him and other colleagues. In his closing statement to the court last month, Calvey called on the court to drop the case and argued that his acquittal “could lead to billions of dollars in new investment in Russia,” because it would send a “huge positive signal about the independence of the [Russian] courts and the protection of investors’ rights.”

Baring Vostok raised $3.7bn in total capital since its start in 1994. The funds are known for early bets on tech companies, including a 500-fold return on Internet giant Yandex NV.

Calvey and the other defendants denied charges of defrauding Vostochny Bank, a lender then controlled by Baring Vostok, blaming the accusations on a business dispute with a Russian partner in Vostochny. That investor, Artem Avetisyan, whose company had sold Vostochny to Baring Vostok and is known for his ties to security services, denied the allegations.

Baring Vostok last year settled a civil suit related to the criminal case and the Supreme Court freed him and the others from home confinement.

Georgia’s border clogged with thousands of Russian fleeing the Kremlin’s mobilisation
Meloni won the elections, but her programme won’t make Italy the next Hungary
More pain stored up for Emerging Europe in 2023