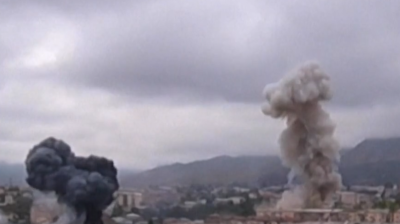 The conflict has entered is third week. Numerous claims of major attacks have been made by both sides since the October 10 ceasefire was supposed to take hold. / Screengrab, VOA footage.
By bne IntelIiNews October 14, 2020

Calls for Paris to abandon neutrality and side with Armenia in its armed conflict with Azerbaijan over the Nagorno-Karabakh territory are growing in France, Voice of America (VOA) reported on October 13.

The Armenian diaspora numbers up to 600,000 people in France and French President Emmanuel Macron has accused Turkey of “crossing a red line” by sending Syrian militia mercenaries to fight on behalf of Azerbaijan in the conflict, something Ankara denies.

Macron has also lately been in a war of words with Turkish counterpart Recep Tayyip Erdogan over Turkey’s aggressive exploration for gas in what Greece and Cyprus claim are their eastern Mediterranean waters, while the two leaders are also at odds over Turkey’s roles in the Libyan and Syrian civil wars. Apart from Greece and Cyprus, France has been most outspoken in urging the EU to impose sanctions on Turkey over the maritime dispute, while it has been more forthright than Russia—the strategic ally with which Armenia has a security pact, but which also has strong ties with Azerbaijan—in urging an end to the fighting over the Nagorno-Karabakh enclave. The US has been relatively uninvolved in addressing the conflict since it broke out, despite a series of demonstrations mounted by the Armenian diaspora in the US involving tens of thousands of participants, including a big rally outside the White House and an even bigger rally outside the Turkish Consulate in Beverly Hills, California.

The co-chairs of the OSCE Minsk Group that has been for three decades trying to resolve the question of Nagorno-Karabakh—a self-proclaimed republic controlled by ethnic Armenians but internationally recognised as part of Azerbaijan—are Russia, the US and France, but Azerbaijan has protested that it does not see France as neutral and has said it wants Turkey to be given a seat at the table in a new talks format.

“We have said countless times that the only solution to this problem is for Armenia to withdraw from Azerbaijani territory,” Turkish Foreign Minister Mevlut Cavusoglu said on October 13 after talks with his Swedish counterpart, Ann Linde, who urged an immediate ceasefire.

In Iran, meanwhile, where approximately one-fifth of the 84-million-strong population are ethnic Azerbaijani, there are reports that some Iranians are worried about a rise in “pan-Turkism,” a political ideology that advocates union between the “Turkic” states such as Turkey, Azerbaijan, Kazakhstan and Turkmenistan.

Around half the population of Nagorno-Karabakh has been displaced since the fighting began, officials in the enclave have said.

Armenian Foreign Minister Zohrab Mnatsakanyan on October 13 was interviewed by BBC Newshour. He said the humanitarian ceasefire brokered by Russia on October 10 “remains very fragile and it remains very concerning to us because what we have been observing is this overwhelming continuation of the attacks and the attacks on the Nagorno-Karabakh settlements and positions; defence positions. And we are still hopeful that we can bring this back to normal, to what we have agreed—to the ceasefire so that we can resume normal work [for substantive talks]”.

Both sides have made many claims and counter-claims about attacks since the ceasefire was declared, with continuous allegations of indiscriminate shelling of civilian areas.

The Associated Press reported that death and injury tolls rose on October 13 as fighting between Armenian and Azerbaijani forces raged for a third week over the separatist territory.

Nagorno-Karabakh military officials said 16 servicemen were killed, bringing the total number of dead among troops to 532 since September 27, when the latest outburst of fighting flared up in the decades-old conflict.

Azerbaijan hasn’t disclosed its military losses. The overall death toll is likely to be much higher. Both sides regularly claim to have inflicted significant military casualties.

Azerbaijani authorities said 42 civilians have been killed on their side since the start of the fighting. Nagorno-Karabakh human rights ombudsman Artak Beglaryan late on October 12 reported at least 31 civilian deaths in the breakaway region in the past two weeks. Hundreds have been wounded.

IRNA said that since the clashes started, more than 50 rockets have hit the border areas of Eastern Azerbaijan province in Iran.