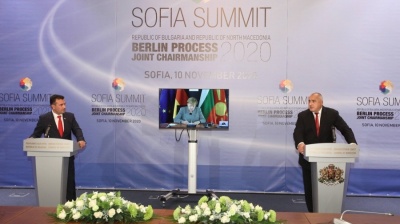 Bulgarian PM Boyko Borissov (right) and his counterpart from North Macedonia Zoran Zaev failed to resolve the differences between the two countries at the recent Sofia Summit.
By Denitsa Koseva in Sofia November 18, 2020

The decision of the government in Sofia to block the start of EU membership talks with North Macedonia has divided Bulgarians, with reactions varying from approval to disgust and shame.

On November 17, Bulgaria officially vetod North Macedonia’s bid to start EU accession talks in December. The Bulgarian conditions for its neighbour to proceed concern the naming of the Macedonian language, a roadmap for the implementation of the 2017 Friendship Agreement and a clear confirmation that North Macedonia has no claims over the Macedonian minority in Bulgaria.

Prime Minister Boyko Borissov said on November 18 that his government used the veto due to a position of principle reflecting the expectations of all Bulgarians.

“There are things that our people will not agree on,” Borissov said as quoted by Dnevnik news outlet.

Several days earlier, a poll by Alpha Research showed that the majority of Bulgarians would back the veto.

“There is a serious deterioration of the image of North Macedonia among the Bulgarian citizens. While 10 years ago it was considered one of the closest and friendliest states in the Balkans, at the moment just 21.9% of Bulgarians characterise it in this way,” the poll noted.

The poll, which was ordered by ruling Gerb party MEP Andrey Kovachev, showed that 83.8% of Bulgarians support the veto. However, many suggested that the poll might have been manipulated to serve the needs of Kovachev and his party.

The day after the veto, social media sites were flooded with posts by Bulgarians saying they want to apologise to their neighbours and that they are ashamed of the actions of their government.

“As a Bulgarian with partially Macedonian origin and as a European I am very ashamed by this criminal decision of our unbearable government. This is yet another blow to our humiliated national dignity,” the writer Manol Glishev wrote.

“I beg for forgiveness all my friends and relatives from Macedonia. This pitiful behaviour of the cops from the DS [the former communist state security service] does not reflect the feelings of the best part of the Bulgarian people,” Glishev added.

He went even further, saying that the decision of the Bulgarian government was "national treason".

“I only hope that the Macedonians who I know do not think that I support such a thing,” another commentator, Irina Manusheva, said.

Others suggested that the decision, which was driven initially by Gerb’s junior coalition partner – far-right VMRO – was made by Borissov as he is already weak and cannot say no to anyone as he is desperate to stay in power until the March 2021 general election.

Many believe that Bulgaria decided suddenly to raise the issues it has with North Macedonia in order to divert attention from the deep political crisis in the country that is causing the already low ratings of the ruling coalition to plummet.

VMRO is believed to have sparked the scandal as a ploy to gain back at least some of its voters. Polls have repeatedly shown that VMRO has little or no chance of passing the 4% threshold to enter the next parliament.

“Now, because of the election in March, the Bulgarian government is on its way to make a profound political mistake with historical consequences,” writer Boyko Penchev said in his blog.

He added that the Bulgarian position cannot be understood either in the EU or within the country.

Critics also suggested that VMRO has could be benefitting financially from the veto. The prosecution revealed last year that members of the party were involved in sale of Bulgarian citizenship documents to Macedonians who claimed to have Bulgarian origins. The documents give free access to the EU. Although there were no charges against the party’s leader, Deputy Prime Minister Krassimir Karakachanov, there are rumours that he was involved in the scheme.

History should stay in the past

Critics of the veto also say that Bulgaria should leave the issues regarding its common history with North Macedonia in the past.

Penchev said that the Bulgarian government wants North Macedonia to admit its population is Bulgarian, which is not possible. Moreover, he said, Macedonians are free to refer to their language and nation as they wish.

“It is clear that we, Bulgarians, are raised to treat Macedonia as a confused child, which has gone a bad way and has forgotten its parents,” Penchev wrote. Even if Bulgarians truly believe their country is the "mother" of North Macedonia, they should let Macedonians go their own way freely, he argued.

“Blocking Macedonia on its path to the European Union is not just a morally indefensible, it is stupid from a geopolitical point of view,” Penchev said.

The ethnic-Turk Movement for Rights and Freedoms (DPS) was the only parliamentary-represented party that did not back the government’s position regarding the veto, according to Radio Free Europe.