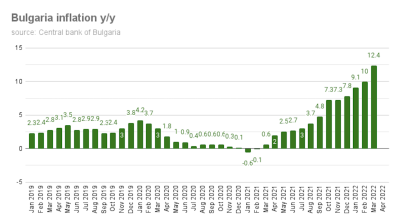 Bulgaria’s consumer prices increased by 12.4% y/y in March, after rising by 10% y/y in February, hitting a 14-year peak, statistics office reported on April 19.

Inflation started rising more significantly in the past several months, affected by high energy prices. It reached a nine-year high in September 2021, going up by 4.8% y/y, and continued climbing in the following months, accelerating after the start of the war in Ukraine.

The consumer price index (CPI) moved up 2.2% month-on-month and was by 5.2% higher from end-December, the National Statistical Institute (NSI) said in a statement.

Compared to the previous month, transport costs increased the most, by 7.9%, while arts and entertainment dropped by 0.6%.

Prime Minister Kiril Petkov's Change Continues intends to propose the scrapping of taxes on bread, fruit and vegetables as part of the measures to curb inflation, the party’s MP Nastimir Ananiev said in an interview with Nova TV on April 19.