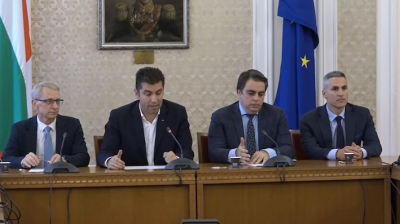 Denkov was minister of education at Petkov’s government and in the previous two caretaker governments. His nomination was backed by Democratic Bulgaria, Petkov said. The two reformist formations have decided to attempt to get support for a minority government if given the second mandate by President Rumen Radev.

As Gerb, which won the October 2 snap general election, failed to get enough support for its government, Change Continues is expected to get the second mandate within days.

Denkov said he has accepted the nomination with the plan to try to find an agreement between political parties in parliament on the most important topics for the country.

“We begin conversations with all political forces, the idea is to decide together what could unite us and those who would be ready to support such a government to engage with work for the implementation of the policies we present,” Denkov said.

He added he would invite all seven political parties in parliament to a joint meeting.

“The task is extremely difficult but we are treating it with absolute responsibility,” Denkov said.

Assen Vassilev, Change Continues’ second founder, said that the party already managed to hold talks with three other parties in parliament on December 15 – Democratic Bulgaria, the Bulgarian Socialist Party (BSP) and Bulgarian Ascend. However, the MPs of these four parties are not enough for a ruling majority.

Change Continues said it will propose a minority government if it gets support for its top priorities and if at least some of them are voted on before the election of a government. They include legislation reforms that would secure Bulgaria’s entry in the eurozone and the Schengen border-free area, as well as social policies.

Scrapping legislation on re-introducing paper ballots is also among the top priorities. Vassilev said that if lawmakers overturn the veto Radev has imposed on those changes this would be a very bad sign of the lack of political will for talks on the important topics for Bulgaria.

“We hope that we can persuade at least some of the parties that participate in these changes to the electoral law to reconsider whether it is more important to have a government this winter or if they are ready to bury this opportunity because of the electoral law,” Denkov said.

Meanwhile, Gerb and far-right Vazrazhdane indicated that they would not participate in meetings organised by Change Continues.