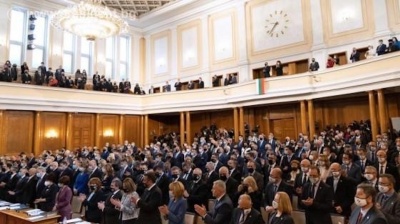 The Bulgarian Socialist Party (BSP) said it will return the mandate to form a government immediately after President Rumen Radev gives it to the party on May 5, which means the country will hold an early election in mid-July.

BSP is to be offered the third and final mandate after the largest two parties in the new parliament – outgoing Prime Minister Boyko Borissov’s Gerb and popular showman Slavi Trifonov’s There Are Such People – also have failed to form governments.

Gerb proposed Daniel Mitov for prime minister but no political party has agreed to enter in coalition talks with Borissov.

There Are Such People refused to even start coalition talks, saying it will not accept support from Gerb, the BSP or the ethnic-Turk Movement for Rights and Freedoms (DPS), while the MPs of the other two newcomers in parliament – Democratic Bulgaria and Stand up! Thugs out! – would not be enough for a majority.

After the failure of the third mandate, the constitution obliges Radev to dissolve parliament, appoint a caretaker government and decree a date for elections two months after dissolving the parliament.

The elections would be held under the new electoral law, which was approved by the current government at the end of April and entered force on May 1.

A poll carried out by Market Links at the end of April showed that, should a general election be held today, Gerb would gain even less support than on April 4 – just 21.1%, dropping behind There Are Such People, which would raise its share of the vote to 20.3%. The BSP would remain in third place, with 16.5% support, while reformist Democratic Bulgaria would come fourth with 11.9%. Currently, this formation is fifth after the DPS. The ethnic-Turk party would get 9.4%, according to the poll. The sixth party in parliament, Stand up! Thugs out! would see its support rise to 5.9%.

The poll also showed that currently Trifonov has the highest rating of all political leaders at 41.6%, followed by Maya Manolova, the leader of Stand up! Thugs out! (26.6%) and Hristo Ivanov, one of the leaders of Democratic Bulgaria (25.2%). Borissov, who used to be the second most popular political leader after President Radev, is now fourth with a rating of 21.5%. The BSP’s leader follows with 20%, while the leader of the DPS, Mustafa Karadayi, is last with 11.8%.

The poll also showed that the turnout would be higher than on April 4 with 60% of respondents saying they definitely would vote, while 21% say they would rather vote and only 10% saying they would definitely not vote.

Analysts comment that the three new political formations in the parliament might gain enough support in the snap election to be able to form a stable majority. On the other hand, Gerb could mobilise and gain more votes but is highly unlikely to be able to form another government.

Meanwhile, the upcoming general election is not expected to affect the country’s key economic policies, Fitch Ratings said in a statement on May 4. “Commitment to prudent fiscal and macro policies, and euro accession is broad-based and long-standing, and none of the anti-establishment parties that made gains are seeking to change relations with the EU,” the rating agency noted.

It added that risks of abrupt changes to the macro-economic policy settings are slim.

“All parties, including those that are anti-establishment, see significant benefits to investment and growth from upcoming EU funding programmes. Cross-party consensus on euro adoption is similarly broad, as is commitment to fiscal prudence and the currency board framework,” Fitch noted.

Moreover, the anti-establishment parties could speed up reforms related to the rule of law, institutional quality and fight against corruption.

On the other hand, Bulgaria will have an interim government until the election, which could delay reforms, including those linked the Next Generation EU (NGEU) Covid-19 recovery fund.

BREAKING: Putin signs off annexation of four Ukrainian regions
2 hours ago
Kremlin preparing for a protracted conflict by putting Russian economy onto a war footing
6 hours ago
Hungary’s forint slides to new low after central bank ends tightening cycle
9 hours ago
Slovak ministers criticise Czech border controls
9 hours ago
Might Trussonomics be a branch of Erdoganomics?
14 hours ago