Bulgaria one step away from third general election this year 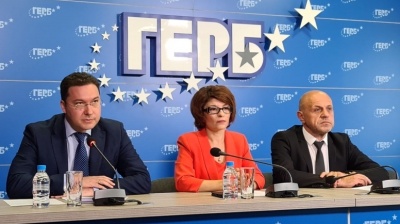 Top Gerb officials explain why the party handed back its mandate to form a government. / Gerb
By bne IntelliNews August 21, 2021

President Rumen Radev now has to decide which party will get the third and final mandate before Bulgaria heads to a new general election.

A statement from the presidency said Radev had given the mandate forming a government to Gerb-UDG’s candidate for prime minister, Daniel Mitov.

“Today [August 20], according to the constitutional procedure, the head of state Rumen Radev handed over an investigative mandate to form a government to the nominated candidate for prime minister from the second largest parliamentary group in the 46th National Assembly Gerb-UDF, Daniel Mitov,” the statement said.

Before doing so, Gerb, which came a close second to former showman Slavi Trifonov’s There Are Such People in the July 11 snap election, presented its proposal for a government, including a list of ministers.

"The responsibility to our voters and to the Bulgarian voters requires us to present the structure and composition of the Council of Ministers, although we will return the mandate immediately. Gerb was the first after the elections for the 46th National Assembly to state that it would be in opposition,” said the chair of the Gerb-UDF parliamentary group Desislava Atanasova at a press conference at the party headquarters on August 20.

"We owe it to the voters to present the cabinet project to them and see what potential we have,” added Mitov, the party’s deputy chairman.

“The heavy division that has developed in Bulgarian society and the heavy division between institutions and political parties lead to the fact that we cannot count on any constructive conversation and possibly a conversation about policies and coalition agreements. Therefore, in order not to delay the procedure and to approach the Bulgarian voters responsibly, we will give the president the opportunity to make a quick decision to hand over the third term,” he added.

"Bulgaria needs stable governance. We are facing crises that need to be managed, and they can only be managed through a government, behind which stands a clearly formulated and formatted parliamentary majority," Mitov added.

He also slammed what he called the "self-proclaimed alternative parties" for failing to take responsibility.

Bulgaria’s initial general election in April produced a fragmented parliament, that was split between the established parties Gerb, the Bulgarian Socialist Party (BSP) and the ethnic Turk Movement for Rights and Freedoms (DPS) on the one hand, and the political newcomers ITN, Democratic Bulgaria and Stand Up! Thugs Out! (later renamed Stand up.BG! We Are coming or ISBG) on the other.

As none of the parties managed to form a majority, a second election was called for July 11. However, while there were some changes — notably ITN overtook former ruling party Gerb to become the largest party in the new parliament — the vote didn’t fundamentally alter the makeup of the parliament. Initially, the most likely outcome appeared to be a government backed by the three political newcomers plus the BSP, but talks broke down when Trifonov refused to offer his potential partners the guarantees they sought.

ITN returned its mandate, with Trifonov saying the party will remain in opposition. Following Gerb’s decision to do the same, Radev can choose any of the remaining parties to receive the mandate before calling a new election.

Georgi Svilenski, the deputy chairman of the BSP’s parliamentary group, said on August 20 that his party should be given the next mandate. “From now on, it is the job of politicians to make sure that Bulgarian citizens do not go to the polls three or four times a year in parliamentary elections, because the results will probably be identical again,” Svilenski said on the ‘Face to Face’ show on bTV, a party statement said.

Another option that has been discussed would be for parties to back the highly popular caretaker government that has been working to expose the corrupt schemes of former administrations.

In the meantime, both Radev and caretaker Prime Minister Stefan Yanev have been pushing for MPs to adopt a revised budget, saying this is urgently needed to support the economy and the healthcare system as a new wave of coronavirus infections mounts in the country.

First official results from Bosnian elections put nationalists ahead after exit polls predicted losses
19 hours ago
Georgian MPs want to rid the country of oligarchs, but not all of them
20 hours ago
Hungary agrees on deferred payments with Gazprom for winter gas deliveries
20 hours ago
US sanctions Russia’s CBR head Nabiullina and other officials
20 hours ago
Russia prepares for new attacks against Ukraine from Belarusian territory
20 hours ago