John Warren started his career in Russia two months after the collapse of the Soviet Union as a grain trader, but after losing everything in the financial crisis of 1998, he set up a sausage-making business in his kitchen in 2004 that went straight into profit and today is churning out 12 tonnes of sausages a month.

Warren was 21 in 1991 and had just finished a degree in Russian at Bristol University when Mikhail Gorbachev was ousted as leader of the Soviet Union in August of that year. He spent a month at the start of the summer trying to convince an investment bank to hire him and send him to Russia, but without success. Sitting at home watching the Soviet Union implode was more than he could bear; that October, he bought a one-way ticket and flew to Moscow.

Warren landed on his feet. Ebullient and energetic, it is easy to imagine him swimming effortless through the chaos of Russia as communism came crashing down around him. Very soon he met Nick Jenkins, a sugar trader with Swiss trading company Glencore, who gave him a job, partly thanks to his fluent Russian - still a rare commodity amongst expats in those days. After a quick trip to Rotterdam for an interview and Warren had a job as a grain trader for the infamous US commodities trader Mark Rich. A real world Gordan Gekko figure, Rich was indicted in 1983 in the US for illegally making oil deals with Iran in the 1970s and 1980s, but he was also very early into Russia and made a fortune from the changes that the fall of the Iron Curtain wrought.

Over the next few years, Warren travelled all over the former Soviet Union. The biggest change that followed the break-up of the Soviet Union was all the newly minted countries were suddenly responsible for feeding their people, but few of the 15 new republics actually produced grain. Under the old system, they were simply allotted a quota of grain by the Central Committee; as independent countries they now had to buy what they didn't produce. By 1992, Warren was personally responsible for selling 15m tonnes of grain in the Commonwealth of Independent States (CIS) from a total of 45m tonnes imported from the EU.

After several years of trading grain for Rich, Warren decided that Moscow was too far from the grain and wanted to move to Rostov-on-Don, one of Russia's major agricultural centres in the Volga basin. His bosses were reluctant to see him go, but backed his new company with a $1m investment and the business flourished.

Seeds of a business

Warren bought sunflower seeds from the local farmers for about $50 per tonne and sold them on the international market for closer to $250 per tonne. Moreover, with inflation running in triple digits, you could make at least another 15% on the changes in the exchange rate (much of which ended up in the pockets of officials involved in the export of the grain). Volumes ballooned and soon Warren was dealing with $10m worth of deals a year. He bought a yacht in Europe that he sailed back to Rostov, a Ferrari and an apartment in London.

But the financial crisis of 1998 killed the business almost overnight. The ruble fell to a quarter of its value overnight on August 17, 1998, and like many traders Warren found all his cash was locked up in stock that had massively depreciated and he couldn't sell because the state had instantly clamped down on exports. "For the next two years, I was only paying myself just enough to live on and had to trade my way out of a $3m debt I owed to Rich Company," says Warren. "I paid off most of it until they finally took pity on me and wrote off the rest of the debt."

Like many foreigners, Warren returned home after the crash. But after running on London's financial sector treadmill for a few years, he gave up and came back to Moscow where he got a job at leading investment bank Troika Dialog as an equity salesman.

Warren was too much of an entrepreneur to last long in an investment bank and quit a year later to go into business. He had been mulling over several ideas, including recycling and getting into health food - an idea well ahead of its time - before hitting on sausages. "I kicked the business off by inviting all my friends to breakfast," says Warren, "and gave them a good fry-up with all the trimmings. After breakfast I asked them if they liked the sausages and told them 'I made them' and told them to spread the word."

Warren had been down the Dorogomilovsky market near the river Moskva and spent $60 on a sausage-making machine and began cranking out sausages in his kitchen. Word spread quickly as good sausages were still hard to come by and British-style sausages were non-existent in Russia. Warren spent the days in his apartment grinding out sausages and in the evening when the traffic jams had subsided, he would drive around the city delivering them to his customers. "Within six months, we had more orders than we could physically cope with," says Warren. "I had a team of people working in shifts around the clock; I remember lying in bed listening to the soft whir of the sausage machine running in the kitchen."

Since then, the business has gone from strength to strength. By the start of the following year, he moved into a small factory and in 2005 brought Michael Sito, a well-known fund manager and friend from his Troika days, in as an investor. They bought a professional sausage machine and an expensive packaging machine.

The business started by catering to several hundred expats living in Moscow, but after Warren singed distribution deals with supermarket chains like the upmarket Azbuka Vekusa, expats now account for only about 4% of sales. At the company's peak, just before the global economic crisis struck in September 2008, Warren Sausages was churning out 12 tonnes of sausages a month and turning over about $2m a year.

Still, Warren's business highlights many of the problems that Russia's food processing business faces. Although the Warren Sausage is an unusual example of a high-quality processed food product that is actually made in Russia, Warren is still forced to import almost all his meat from places like Argentina, as the domestic agricultural producers are still playing catch-up with western standards. "Chicken is done and is up to westerns standards and pork is getting there," says Warren. "But beef still has a long way to go. The Russian beef producers fall down on everything: feed, husbandry, stock. There are various people - including investment bankers - who are starting to invest into beef, but it will take four years just to build up a herd.

What next? Warren says that the goal is to focus on growing the business over the next two years. But it is also clear that his attention is beginning to wander again as he spends much of his free time at the dacha and playing music - his first love (he went to Winchester public school on a music scholarship, playing the French horn). "It's getting more organised now. We have a professional manager, as at the end of the day I am an entrepreneur not a manager," says Warren. "We estimated that ultimately this is a $10m-20m business. But today it is still a Moscow-based cottage industry." 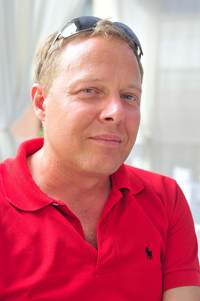