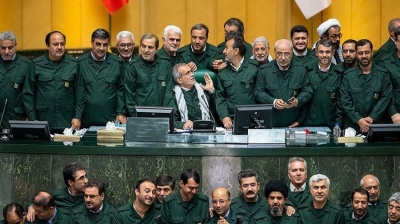 At the time of the US designation of the Guard as terrorist nearly four years ago, Iranian MPs wore IRGC uniforms in parliament as a show of support for the elite wing of the Iranian armed forces. / bne IntelliNews
By bne IntelIiNews January 3, 2023

The IRGC has arrested seven people with links to the UK over anti-regime protests, since the unrest began in mid-September.

When then US president Donald Trump in April 2019 designated the IRGC as a foreign terrorist organisation (FTO), the move was seen as unprecedented as it was not usual for one country to designate armed forces of another country in such a fashion. Iran responded by declaring US Central Command (Centcom) a terrorist organisation. After Joe Biden succeeded Trump as president, there was speculation the designation might be lifted, but the White House has stopped short of seriously advancing such a proposal even as part of negotiations to revive the 2015 nuclear deal, or JCPOA.

The UK move, which the Telegraph reported would be announced within weeks, is said to be supported by Britain's security minister, Tom Tugendhat, and Home Secretary Suella Braverman.

Proscribing the Guard as a terrorist group would mean that it would become a criminal offence to be a member of the group, attend its meetings and carry its logo in public.

The arresting by the IRGC of the seven people with links to the UK prompted British Prime Minister Rishi Sunak to last week urge Iran to stop detaining dual nationals. The practice, he said, should not be used to obtain "diplomatic leverage".

Iran’s Basij paramilitary, which is involved in the crackdown on the arrest that has swept Iran, is affiliated with the IRGC.

The IRGC also runs many commercial companies in Iran, particularly in construction and engineering, accounting for a major part of the Iranian economy.