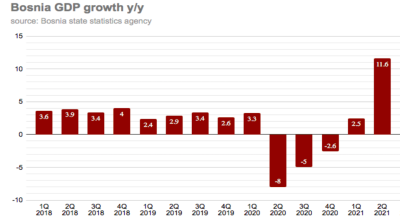 The Central Bank of Bosnia and Herzegovina (CBBH) has raised its projections for Bosnia’s economic growth in 2021 and 2022 compared to the projections from May 2021, which were prepared on the basis of quarterly data from the end of 2020.

The CBBH statement states the growth of economic activity in 2021 is expected to reach 5.8%, which is 2.4 percentage points higher compared to the projection six months ago. The 2022 economic growth projection has been revised upwards by 50 basis points compared to the first round of projections from 2021, to 3.9%.

The growth of personal spending in 2021 has been based on positive labour market indicators, as well as the projected decline of the number of unemployed people, modest growth of employment and the average net wage and the increase of remittances from foreign countries.

Compared to the previous round of projections, the recovery of personal spending until the end of 2022 was revised upwards, mainly due to the significant revision of 2019 official data in the second half of 2021. According to the official data, personal spending continued to increase strongly in the first half of 2021. The projection of growth of personal spending in 2022 was strongly influenced by the base effect, and expected trends related to labour market, lending and remittances from foreign countries. The central bank added: “We remain quite conservative in respect of unemployment rate trends, but also the speed at which workers from Bosnia could be employed in the EU in short term.”

In 2022, the CBBH expects a moderate growth of real economic activity. The projection from May 2021 was revised upwards mainly due to the expected stronger investment activity, based on the high economic growth rate in 2021, but also the removal of obstacles for stronger arrival of foreign investors, said the CBBH.

Stronger inflation growth is expected in the projection period. The inflationary shock forecast earlier this year has materialised, the central bank said. “Although it seems that the projected inflation rate of 1.7% in 2021 is relatively low, given the strong growth of energy and food prices in international markets, but also the price of international transport of goods, it should be borne in mind that deflation continued in Bosnia in the first half-year,” it added.

“To a significant extent, due to these deflationary pressures in the first half of 2021, we expect inflationary pressures to strengthen in 2022. Inflation projections are consistent with the projected trend in economic activity, and prices from futures contracts for energy. However, despite the currently prevailing view that inflation shocks in Europe are transitory, there are still risks of stronger inflation shocks in Bosnia, especially in the medium term. The risks are particularly related to the country's electricity prices, and the effects of the normalisation of monetary policy of the European Central Bank,” the CBBH concluded.

Russia’s industrial output decline slows to only 0.1% in August
8 hours ago
Putin's popularity remains high, but even after a hit in September it is still at 77%
8 hours ago
Russia on track to have a record-smashing grain harvest
2 days ago
Bosnia posts annual CPI inflation of 16.8% y/y in August
2 days ago
IMF sees Romania’s economy growing by 4.8% in 2022, analysts are even more bullish
3 days ago