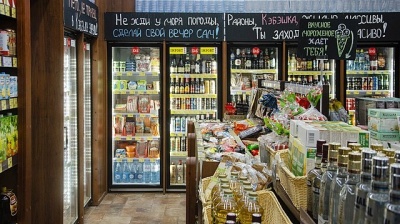 Mercury Retail Group owns chains Red & White and Bristol. It is expected to raise between $1.2-1.3bn when it floats in Moscow on November 10. / Wiki Commons
By bne IntelIiNews November 4, 2021

Russia’s Mercury Retail Holding, the largest ultra-convenience store operator and the third-largest food retailer in Russia, has covered books early in its Moscow IPO, sources close to the deal told bne IntelliNews on November 4. The story has also been reported by Bloomberg.

This would mean that the group has received enough demand to cover books a full five days earlier than scheduled. The books opened on Wednesday, and were due to close on November 9. Trading on the Moscow Stock Exchange (MOEX) is expected to begin on November 10.

The company set the price range at between $6 and $6.50 per GDR, implying a market capitalisation for Mercury Retail of between $12bn and $13bn, according to a press release by the company.

The offering will see up to 200,000,000 global depository receipts issued (GDR), each representing one existing ordinary share of Mercury Retail Holding plc. Based on the offering price range, this implies an approximate offering size of between $1.2bn and $1.3bn.

The group, which owns retail chains Red & White and Bristol, saw strong operational performance in 3Q 2021. Like-for-like (LfL) sales during the period increased by approximately 14% year on year, while LFL sales for the first nine months of 2021 grew by approximately 17% y/y, as reported by bne IntelliNews.

The offering will see Mercury Retail Group become the latest of a clutch of home-grown companies to list on the Moscow Exchange this year, the busiest IPO season the exchange has seen in a decade.

First official results from Bosnian elections put nationalists ahead after exit polls predicted losses
20 hours ago
Georgian MPs want to rid the country of oligarchs, but not all of them
20 hours ago
Hungary agrees on deferred payments with Gazprom for winter gas deliveries
21 hours ago
US sanctions Russia’s CBR head Nabiullina and other officials
21 hours ago
Russia prepares for new attacks against Ukraine from Belarusian territory
21 hours ago