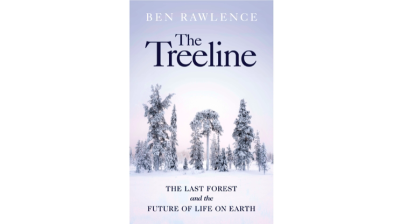 Trees almost surround the North Pole, with vast forests spreading across Scandinavia, northern Scotland, Greenland, Canada, Alaska and – the largest stretch of unbroken forest – northern Siberia and the Russian Far East. In The Treeline: The last forest and the future of life on earth, Ben Rawlence travels to remote settlements along the treeline, charting the gradual northward creep of the forests onto land that was once too cold to support tree growth.

As the world grapples with the climate crisis, the importance of the world’s northern forests can hardly be over-estimated. After the oceans, this is the world’s second largest biome: it covers one-fifth of the globe and contains one-third of its trees. It has also – despite the ravages of logging and ever more frequent forest fires – survived better than the Amazon, which one of Rawlence’s interviewees, the author, medical biochemist and botanist Diana Beresford-Kroeger, says is “done for”, while other tropical forests are “severely degraded”. That leaves the northern boreal as the world’s “last forest”.

However, climate change is taking its toll in the far north too. The position of the Arctic treeline broadly tracks the line around the globe where the average summer temperature is 10C, but this no longer coincides with the Arctic Circle. The great forests are moving northwards as the earth heats up, taking over the tundra to the north, while some of the southern reaches of the forest become dry steppe. The place where Rawlence starts his journey, the Scottish Cairngorms, will be well south of the treeline by the end of the century.

Even in the most northerly forest on earth at Ary Mas in the far north of Russia, things are changing. Deep inside the Arctic Circle, Rawlence reaches Ary Mas after a gruelling journey over tundra and the frozen sea, finding a mix of nostalgia for the old way of life and a welcoming of new technologies among the Dolgans. While the changes the region’s residents observe are small, there are clear differences: new kinds of birds migrating north, daisies and dragonflies appearing in the tundra.

Climate change is happening much faster than anyone predicted in Siberia; the forest fires seen in 2020 not been forecast until four decades later. That year, temperatures broke records, and a massive toxic spill from oil tanks in the Arctic city of Norilsk was caused at least partly by melting permafrost.

The worrying developments have continued in 2021 and 2022. The wildfires in the taiga forests in Siberia and the Far East in 2021 were unprecedented, covering an area of at least 18.8mn hectares, and for the first time ever smoke from the fires reached the North Pole.

This summer, attention has been diverted to the war in Ukraine, but the forests are still burning, and states of emergency have been declared in seven Russian regions. Nor was the western part of the country spared; in late August fires south of Moscow blanketed the capital with smog.

At the Sukachev Institute in Krasnoyarsk – where the author arrives in an unseasonably warm February – Rawlence interviews Nadezhda Tchebakova, a scientist modelling future scenarios for Siberia’s forests.

Tchebakova’s model, based on scenarios from the Intergovernmental Panel on Climate Change (IPCC), forecasts that while the northern treelike will shift polewards slightly, "the real change was the taiga’s southern limit. With increasing drought and more frequent fires, the steppe of Central Asia was projected to expand, consuming the burned out taiga as it went, preventing it from regenerating.” That is already happening.

The increased frequency of fires – which typically used to break out between five and 30 years apart and are now annual events – mean that instead of forests regrowing after fires, the trees are not coming back.

An important point made by Rawlence is that simply having more trees, further north, is not a solution to climate change.

“While the boreal is the greatest planetary source of oxygen, more trees there does not necessarily mean more carbon sequestered from the atmosphere,” he writes.

“As trees invade frozen tundra they hasten the melting of permafrost, frozen soils that contain enough greenhouse gases (GHGs) to accelerate global warming beyond anything scientists have modelled.”

The new northerly forests and those that grow back after fires are not the same as the old forests; their structure is dramatically different. In Siberia, Scots pine is replacing larch on burn sites, leading to a reduction in the carbon the forests can hold. Of the carbon dioxide that the taiga sequesters, larch is responsible for soaking up 55%, even if under 40% of the trees are larches.

That leads to a major hole in many models, which rely on fixed assumptions of how much carbon dioxide forests can store. However, a “warming forest is less efficient at cycling and sequestering carbon”, warns Rawlence, citing one study which says by 2040 forests will only absorb half as much carbon dioxide as they do at present.

In some of the other changes he observes, aggressive tree growth in northern Scandinavia is putting reindeer herding at risk, as reindeer need old growth forests that take 160 years to grow. Pines in Scotland are releasing seeds sooner, disrupting seasonal cycles of the forest. In Alaska the trees are turning brown as the warming air sucks moisture out of their leaves.

Tchebakova forecasts, as quoted by Rawlance, that by 2100 50% or more of Siberia’s forest will become steppe. The southern boundary of the forests will move around 1,000 km north, making around 85% of Siberia suitable for agriculture.

The warming climate is already opening up the Arctic economy. Among the developments listed by Rawlance are wind farms inside the Arctic circle in Norway, RusAgro expanding wheat farms near Vladivostok and the opening of Arctic shipping routes.

At the same time, as large swathes of the Arctic are set to become habitable for humans within this century, the opposite is happening further south. By 2070, an estimated 3bn people will be living areas where it is too hot to work outside or sleep without air conditioning. A wave of emigration from south to north – including to Arctic areas – is forecast.

Multiple examples come up of what Rawlence calls “cruel feedback loops”, where one change precipitates further developments that accelerate the process of climate change.

Thus the blackening of glaciers in Greenland leads to them absorbing more heat and accelerates melting. Another example is that Siberian rivers are now discharging 15% more water into the Arctic ocean than they were a decade ago, which in turn is changing the salinity of the ocean.

And, as documented in the book, forest fires, the warmer climate and the steady northward movement of the forests are melting the permafrost, which stores more carbon than humans have released since they started burning fossil fuels.