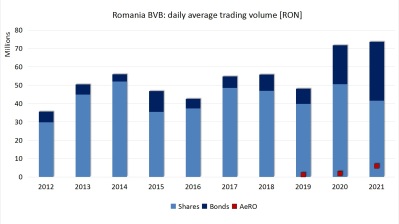 With a combined average daily traded value of RON77mn (€15.6mn) in the first five months of 2021, calculated for both the main trading segment and secondary segment AeRO, the Bucharest Stock Exchange (BVB) boasted the highest daily liquidity in history. For comparison, the average daily value traded in 2020 was RON75mn.

The overall performance was possible, however, only because of the two massive bond issues in May by Raiffeisen Bank and Banca Comerciala Romana (BCR). The average daily traded value for shares only (RON41.6mn) lagged 17.5% behind the record set in 2020.

While the main market may not have outperformed in the first part of 2021, the alternative AeRO market hosted a series of IPOs by startups that more than tripled its liquidity.

The main trading segment, which includes blue chips such as Banca Transilvania, Romgaz and BRD, recorded a daily turnover of RON37mn for shares and RON31mn for bonds. The volumes were propped up by the bond issues from BCR and Raiffeisen banks.

The senior non-preferred bonds issued by BCR, Romania’s second-biggest lender by assets, which is part of the Austrian Erste Bank group, worth RON1bn (€200mn), started trading on May 31.

Separately, the AeRO segment, with RON4.5mn of shares and RON1.4mn bonds traded daily reached 8% of the total market, three times compared to 2020.

A series of new companies listed their shares on AeRO. In the biggest AeRO listing ever, the shares Agroserv Mariuta, a Romanian gourmet dairy producer known for the Laptaria cu Caimac brand, debuted on the AeRO market on May 23. The company's market capitalisation stabilised at around RON100mn.

In another AeRO listing, the organic wine producer Vifrana went public under the ticker BIOW on May 14 . The company’s market capitalisation reached RON25mn at the end of the listing day to slightly ease afterwards.