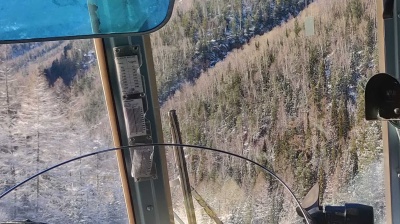 Due to its history of pioneering technological development, its expansive geography, and its vast and well financed petrochemicals industry, Russia could be at the forefront of green air travel if it chooses to be. / Image: Theo Normanton.
By Theo Normanton in Moscow December 13, 2021

It’s no secret that air travel is one of the biggest culprits when it comes to global warming. The David Suzuki Foundation estimates that emissions from aviation could eat up a whole quarter of the available carbon budget for limiting temperature rise to 1.5˚C if left unchecked. But it doesn’t have to be that way: by using the existing technological solutions and investing more in their own research, airlines could make sustainable air travel a reality.

Believe it or not, Russia is relatively well-positioned to be a leader on carbon-friendly aviation. Due to its history of pioneering technological development, its expansive geography (which necessitates domestic air travel), and its vast and well-financed petrochemicals industry, Russia could be at the forefront of green air travel if it chooses to be – this was the message from a recent report on Russian airlines by VTB Bank. But this has not yet been reflected in the actions of the Russian aviation industry, which appears still to be in the ‘Denial’ stage of the Kubler-Ross Grief Cycle. If they do choose to change course and embrace the green transformation, here are the steps that Russian airlines will need to take…

Governments have been slowly waking up to the need for fuel taxes, which are doubly useful in that they disincentivise unnecessary air travel and also help to finance research and development of greener technologies. Thus France recently announced that any flight which could be replaced with a train journey of less than two and a half hours will soon be made illegal. Similarly, the UK announced in its recent budget that it will raise taxes on “ultra” long-haul flights. International bodies are also introducing stricter requirements for airlines, like the EU’s Fit for 55 legislative package, which requires that aviation fuel at European airports contains at least 2% of sustainable aviation fuel (SAF) by 2025.

Yet if these changes are to be impactful, they have to be made on the initiative of the airlines themselves. Carriers can circumnavigate levies by simply raising ticket prices to make customers foot the bill – VTB’s report on Russian airlines estimates that existing rules from governments and aviation regulators could result in a one-third increase in the ticket price of a Russian low-cost carrier by 2030.

It is encouraging, therefore, to see the industry itself begin to set targets for cutting emissions. The International Air Transport Association (IATA) has members from 120 countries (including Russia), and hopes to achieve net-zero emissions by 2050.

The first port of call in achieving these goals will be to invest heavily in SAF. Often made from substances like cooking oil and urban waste, this has a similar chemical composition to conventional jet fuel, and can already be used in aircraft engines. Earlier this month, United Airlines ran a commercial flight on 100% SAF. It has the potential to reduce emissions by 80%. Of course, SAF is currently more expensive than ordinary jet fuel – almost four times more expensive. This is precisely why airlines need to invest in it early: it can only be made more affordable by mass production and the technological development which goes hand in hand with widespread use.

Now that IAG has pledged to increase the share of SAF in its fuel mix to 10% by 2030, it is high time for Russian airlines to step up to the plate. With Indian Oil supporting Kingfisher Airline by sourcing sustainable fuel and Total Energies supplying Air France with SAF for pilot flights, it’s clear that petrochemical companies have a role to play in developing this crucial new technology. With enormous state-owned and private oil players, Russia has an advantage here. So far, though, only Gazprom Neft has announced that it plans to produce SAF.

In fact, Gazprom Neft announced the formation of a "Eurasian SAF Alliance" this week, which will include Aeroflot and the S7 airlines group. Their immediate goal is to launch a commercial flight with SAF in the fuel mix by 2024. The next step for this club will be developing a concrete roadmap for the development and production of affordable biofuel, which the announcement on the S7 website describes as the group's main goal.

Existing technologies are a crucial stepping stone to sustainable aviation, but they are not enough. In order to meet the goals set by the Paris Accords, innovation will be needed. Most aviation experts agree that in future air travel will run on electricity or hydrogen. Both come with their own difficulties: current battery technology is too heavy to practically power anything other than short-haul flights, while hydrogen would need to be cooled to -250˚C in situ in order to be used in liquid form.

Here, again, putting large sums of money into developing and piloting these technologies will be important. But Russia has already had a go at tackling the hydrogen quandary as early as 1988, when Soviet scientists successfully flew a Tupolev TU-155 using cryogenically frozen fuel.

It is remarkable, considering a successful pilot of hydrogen-based fuel was conducted over 30 years ago, that the technology is still so far from being used commercially now. Airbus has the most ambitious hydrogen plans as part of its Zero Emission programme, which hopes to see the first flight using hydrogen in 2035. Given that Russia approved a roadmap for the development of its hydrogen industry earlier this year, perhaps it’s time for Russian scientists to take up the mantle once more in hydrogen-powered aviation…

An important measure in the short term is ensuring that the technologies currently in place are well-serviced, modern and not energy-intensive. Here, Russian airlines are already probably ahead of their peers, according to the report by VTB Bank. Russia has a relatively young fleet on average, and the opportunities which could be created by ironing out inefficiencies in air traffic management are significant.

Another area ripe for upgrading is that of carbon offsetting. This is already being used by some airlines, who buy certificates from green companies to “compensate” every 100 tonnes of CO2 they emit. In reality, of course, no such straight swap is possible, and nor can the precise damage of carbon emissions from any one trip be easily calculated, so offsetting should be taken with a pinch of salt. With major airlines like Lufthansa planning to offset carbon emissions on international flights, and Delta and BA offsetting some emissions from domestic flights, it is time for Russian peers to follow suit. While carbon offsetting is often seen as an easy exoneration for airlines, it is nonetheless a contribution, and shouldn’t be discounted altogether. If it is to make a difference, though, this scheme needs to be adopted on a much larger scale than it is now.

Digitisation of agriculture is already helping farmers to respond to climate change and raise production, according to the BioSense Institute in Serbia’s Novi Sad.

The European Commission is considering raising its renewable energy target for 2030 to 45% in new green plans to be published later in May.

The war in Ukraine has interrupted grain exports from the country and could create a global food crisis as vulnerable wheat importing countries in Africa and the Middle East face shortages and rising prices.

Renewables are again set to break global records in 2022, with 320 GW of new capacity forecast to come online and new solar projects in China and Europe driving growth.