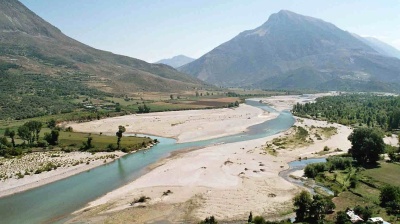 Albanian Prime Minister Edi Rama announced on June 13 that a national park will be created around the Vjosa river.
By bne IntelliNews June 13, 2022

Albanian Prime Minister Edi Rama announced on June 13 that a national park will be created around the Vjosa river.

The Vjosa is considered one of the last wild rivers in Europe – meaning there is not yet any significant hydropower development – and environmental groups have been campaigning to have it made a national park to prevent future hydropower schemes amid a wave of hydropower construction across the Western Balkans.

“Let us be clear when we talk about a national park: we assume the categorical prohibition of any business of economic activity,” Rama said when announcing the decision on June 13.

In his speech, Rama said that the vision for the future is “to build a space for a development that protects the environment and at the same time nourishes the generations that will leave Vjosa a legacy one after another in a new way and until unexplored in Europe today.”

He pledged that the Vjosa “will not enter the tame animal circus of Europe's power system”, where other rivers “have become like circus dogs and cats”.

Environmental campaigners welcomed the decision and Rama’s promise that any economic activity that affects the river would be prohibited, though it is not yet clear what will happen to projects already underway.

“The Wild River National Park will protect the entire network of the Vjosa from the Greek border to the Adriatic Sea, including the free-flowing tributaries. This is something that has never been done before in Europe,” said a press release from several environmental groups that have been campaigning for years to protect the Vjosa.

The Albanian government said on June 13 that it has signed an agreement with US-based outdoor apparel company environmental activism organisation Patagonia to develop the park. In 2021, Patagonia created a six-minute film appealing to people to show their support for a Vjosa wild river national park.

The government previously declared the river and some of its surroundings a ‘natural park’ but environmentalists said this did not offer sufficient protection. Hydropower plants (HPPs) have already been built on some of the Vjosa’s tributaries.

Besjana Guri, communications manager at EcoAlbania, said: “While there is much work to do before we can guarantee the future of the Vjosa, this is a major milestone for Albania and for river defenders everywhere. The ambition of creating Europe’s first Wild River National Park is one step closer to becoming a reality.”

“The message that comes from Tirana today has the potential to extend far beyond the Vjosa – the concept of a Wild River National Park which protects not only the main waterway, but also its tributaries, is unique,” said Ulrich Eichelmann, CEO of Riverwatch. “At the Vjosa, we are witnessing a new model of protection for other rivers in Europe, which are threatened by dam projects and other forms of pressure. We need to think bigger to protect our nature.”

The Vjosa and its tributaries flow from the mountains in Greece, where the river is called Aoos, to Albania’s Adriatic coast.  According to environmentalists, the river and its tributaries form an ecosystem with biodiversity of national and global significance. This is host to more than 1,100 species of animals, including 13 globally threatened animal and two plant species.