Turkey’s exports fell nearly 20% year-on-year in September, while its manufacturing sector contracted for the second consecutive month, according to the latest figures from the Turkish Exporters’ Assembly (TIM).

The 19.8% fall in exports represented the ninth consecutive month of decreases, meaning that every month of 2015 has seen a downturn in exports when compared to the same point in 2014. 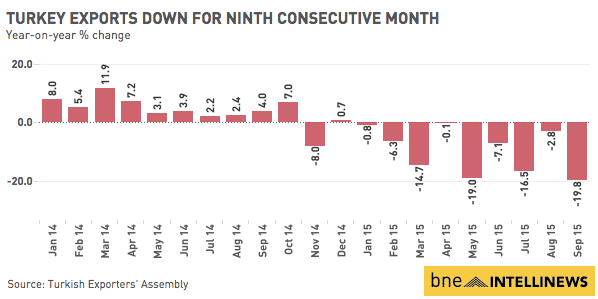 TIM president Mehmet Büyükeşi attributed the decrease to the three-day Eid-al-Adha Islamic holiday, which took place from September 21 to September 23.  Without the loss of three days, Mr. Büyükeşi said, an additional 1.9 billion dollars in exports would have been shipped.

Turkey’s Purchasing Manager’s Index (PMI) also fell to 48.8 in September from 49.3 in August, data from the Istanbul Chamber of Commerce showed. Figures below 50 indicate a contraction in the sector.

While net energy importer Turkey should be enjoying the significant decline in oil prices over the last year, tough market conditions including a weakened lira and ongoing political instability have offset any potential benefit that Turkey may have experienced.

Turkey’s year-to-date exports of $106bn sit 10% lower than the same January-to-September period in 2014. Despite this, Turkish minister for economic affairs Nihat Zeybekci was quoted by Reuters on October 1 as saying that the export figure for Y2015, while still representing a decline against 2014, will not be as bad.