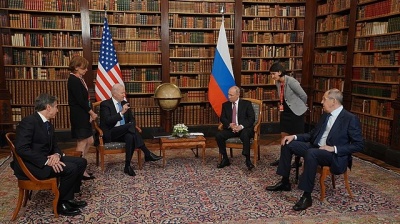 The USA and Russia have been in discussions over tensions in Ukraine for months now, but the rhetoric is toughening on both sides of the border. / Image: The White House via Wikimedia Commons.
By Theo Normanton in Moscow January 31, 2022

In the latest of a series of last-ditch talks to de-escalate tensions between Russia and Ukraine, US Secretary of State Anthony Blinken will talk to Russia’s Foreign Minister Sergei Lavrov over the phone on Tuesday, February 1, according to Russian news agencies.

This comes as Western powers have been increasing the rhetoric surrounding the severity of sanctions in response to a possible Russian invasion. UK Prime Minister Boris Johnson, who plans to speak to Putin later this week, has announced plans which could involve sanctioning “any company or individual of direct interest to the Russian state,” including oligarchs or even Putin’s close acquaintances. Meanwhile, Poland is mulling sending increased shipments of armaments to the Ukrainian forces.

Talks between Russia and the US and its allies have been ongoing for months now. Last week, high-ranking diplomats from the Normandy Four group – France, Germany, Ukraine and Russia – held an eight-hour meeting in Paris in an effort to negotiate the terms of a lasting peace. Talks seemed to be over when the US State Department rejected Russia’s demand of promising no further expansion of the Nato alliance eastward, but tomorrow’s phone call suggests that both sides are still interested in de-escalating.

Russia has brought some 100,000 troops up to bases close to Ukraine since October last year in a move that has unsettled western politicians. More recently, it has begun preparations for a large-scale military exercise in Belarus, which could be a pretext for an invasion of northern Ukraine. Over the weekend, Pentagon spokesperson John Kirby claimed that Moscow had further boosted troop movements around the border, warning that invasion “could happen at any time” on Fox News Sunday.

Fears of a possible invasion of Ukraine by Russia have soared in recent days but bne IntelliNews has reported that the possibility of a full-scale invasion of Ukraine remains highly unlikely, with Ukraine’s military seemingly dovish on the affair, and appetite for conflict low among the Russian population.

Talks are set to continue this week, with Boris Johnson due to travel to the region and Hungary’s Victor Orban calling for de-escalation as he prepares to visit Moscow.