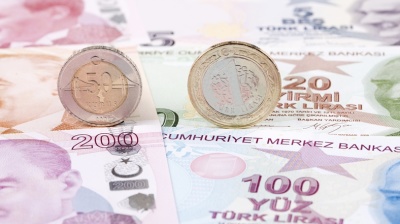 Officials are losing the battle to keep the lira off the ropes. It remains exposed to a knockout blow.
By bne IntelIiNews August 7, 2020

Like a dazed and bloodied boxer who’s been punching above his weight, the Turkish lira hit the canvas on August 6, falling by around 3.5% on the day to a record low of 7.311 against the dollar. But it’s not out for the count yet. Saved by the bell, the currency was led back to its corner where it found a jittery coach, Turkey’s central bank, attempting to rearrange its defences by calling an unorthodox meeting with executives from commercial lenders to discuss latest market developments.

Bloomberg got wind of the August 6 meeting, reporting that Mehmet Ali Akben, head of Turkey’s BDDK banking regulator, was also expected to attend, but that the central bank declined to comment on the gathering. Instead it put out the slightly bemusing statement: “We are watching developments closely.” Good to know.

There was by the end of the day no particular clarity on how the central bank plans to get a sustainable grip on a situation that threatens to turn into Turkey’s second balance of payments crisis within two years, however, the Turkish lira (TRY) was getting something of a breather having recovered to 7.22.

The market appeared to have grown just a touch more positive on the currency after the BDDK published a decision that will permit international banks to conduct lira swaps, suggesting that foreign investors will once again be able to borrow the currency from local lenders. This week saw the Erdogan administration’s withholding of lira from offshore investors spark a rush to sell Turkish equities and bonds to obtain the currency in order to close their trades, causing dire impacts on the Borsa Istanbul and lira-denominated sovereign debt that prompted Palace officials to change course. Market players said the hope was now that with the change announced by the BDDK they can begin to finance their investments in the country and hedge their exposure without the risk of facing abrupt liquidity shortages.

But this is Erdogan’s Turkey and out on the street the locals aren’t laying down bets that 'Erdoganomics'—in which high interest rates are “the mother and father of all evil”—will take a logical path away from the mire. In fact much of the talk compares the “official lira rates”, or the interbank market rate, with the “unofficial lira rates” available at the Grand Bazaar. Nadir Doviz, for example, was by the end of August 7 buying dollars at TRY7.36 and selling at TRY7.46. In Ankara, the Altinkaynak jewellery shop was buying at TRY7.34 and selling at 7.46.

Yanking back the curtain

The day also saw the central bank pinning the blame for the latest lira descent on the coronavirus (COVID-19) pandemic—it stated that “fiscal and monetary policies succeeded in containing the effects of the pandemic on the Turkish economy and maintaining the productive capacity. Recent data suggest that economic recovery has gained pace. In this context, with economic activity normalizing as of early August, the targeted additional liquidity facilities will be phased out—but this is certainly one publication that has argued that the Turkish currency and economy’s severe imbalances have long been excruciating, it simply took the crisis with the virus to yank back the curtain.

As things stand, the central bank, straining every sinew to stick to Erdogan’s demand for lower and lower interest rates despite the frailty of the lira, across last year and this year spent in excess of $100bn on defending the currency and look where it’s landed. The lira’s bad day at the office was preceded by malfunctioning Turkish money markets. It’s time for Erdogan’s economic team to get serious.

The president of 17 years may demand more cheap credit, more booming growth, but has the emperor any clothes? More and more wagers are being placed on central bank governor Murat Uysal being forced to insist on bringing in rate hikes.

While the policy rate is 8.25% compared to annual inflation of near 12%, the November money market pricing for three-month lending is at 10.75%, implying 250bp of tightening by year-end, reported Reuters.

“We have a lot of ingredients here to have a full blown crisis,” Nikolay Markov, senior economist at Pictet Asset Management, told the news agency. “The hope is to have a more proactive policy response from the central bank.”

Eric Baurmeister, head of emerging-market debt at Morgan Stanley Investment Management in New York, was also busy outlining the hole Erdogan has got himself in, telling Bloomberg that Turkey was facing a “dangerous combination” of trying to avoid a devaluation with insufficient reserves and a perception that its currency is overvalued.

“If panic starts and the market starts selling off, you end up devaluing in an uncontrollable manner, you have a currency meltdown and you have no reserves and you find yourself with a real debt-sustainability problem,” he said.

On the eve of the lira tumbling to its latest all-time low, Rabobank economists also outlined the hellish situation, advising investors in a note: “The upside pressure on USD/TRY is fuelled by well-known structural issues of persistently high inflation, a wide current account deficit and a strong preference to use credit to stimulate the economy at all costs. There are also some geopolitical risks related to Turkish involvement in Syria, Libya, and drilling activities around Cyprus.

“The level of trust in banks is a critical factor to watch in the coming months or even weeks. It has to remain high to prevent Turks from withdrawing substantial amounts of dollars from banks. Without retail USD deposits the CBRT [central bank] will not be able to replenish FX reserves quickly enough to prevent the lira from falling precipitously against the dollar.”

“The current scheme of replenishing FX reserves through FX swaps would likely collapse, sending USD/TRY to a new record high that starts with an 8 or perhaps even a two-digit number.”