BEYOND THE BOSPORUS: Erdogan struggles to hold on to the narrative 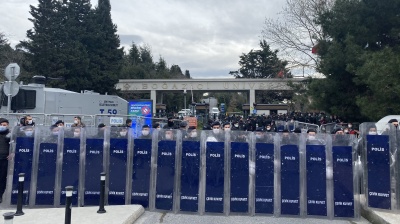 Police seal off the entrance to Istanbul’s Bogazici University.
By bne IntelIiNews February 6, 2021

Simmering tensions are coming to the fore as Turkey’s Erdogan administration and the US Biden administration attempt to form a workable relationship. On the home front, meanwhile, Turkish President Recep Tayyip Erdogan—an authoritarian who was given an easy ride by former American president Donald Trump—is facing increasing rejection from the country’s youth, with pollsters warning that of five million young people who will become eligible to vote in the next elections, scheduled for 2023, only around a third would support his Justice and Development Party (AKP).

Last August, there was an angry response from Erdogan’s supporters when comments made by then US presidential candidate Joe Biden about the Turkish president to the New York Times—the “autocrat”, said Biden, “has to pay a price”, while Washington, he added, should be encouraging opposition leaders “to be able to take on and defeat Erdogan. Not by a coup, not by a coup, but by the electoral process.”—resurfaced in a video. But now, as president, Biden in all probability will attempt to accommodate Erdogan—or more to the point, Turkey, still a vital Nato ally straddling Europe and the Middle East. For his part, Erdogan knows Turkey is enveloped in a horrendous economic crisis that began long before the coronavirus pandemic made its impact and is not expected to risk sending his country’s economy over the edge by quitting on Biden.

Contacts between Erdogan’s officials and Biden’s have been minimal so far, but nerves have been set on edge by US criticisms made of the Turkish authorities’ response to the ongoing student demonstrations at Istanbul’s Bogazici University, triggered by Erdogan imposing his choice of rector on the institution. Turkey’s interior minister Suleyman Soylu on February 3 resorted to calling the student protesters “LGBT deviants”, while Erdogan responded that "This country will not be run by terrorists. We will do whatever is needed to prevent this," while praising the youth wing of the Islamic-rooted AKP for "not being the LGBT youth". This brought a mild rebuke from the US, delivered by US State Department spokesperson Ned Price. The US, said Price, wished to express its concern about the Bogazici demonstrations and condemn the LGBT rhetoric surrounding them.

The rebuke, however, proved too much for Soylu who, on February 4, warmed up old accusations that the US was behind the failed coup that took place in Turkey in July 2016. The US State Department quickly responded that the assertion was “wholly false”, adding in a statement that such "remarks and other unfounded and irresponsible claims of U.S. responsibility for events in Turkey are inconsistent with Turkey's status as a NATO Ally and strategic partner of the United States".

Also on February 4, in an unmistakable reference to the US concern expressed in relation to the university protests and the LGBT comments, the Turkish foreign ministry said in a statement: “We warn certain circles [abroad] not to use language provoking groups that resort to illegal ways and encourage illegal actions. It is nobody’s place to intervene Turkey’s internal affairs.”

February 5 brought a reaction from Erdogan, not known for shrinking away in the face of criticism. The US, he told reporters in Istanbul, should handle its own domestic issues, adding, in relation to the nationwide Black Lives Matter protests seen in America: “Let me say this to the United States: Are you not ashamed of what happened in the United States before the [American November 2020 presidential] election in terms of democracy? Racism reached a new high. How will you explain to the world how your police killed your Black citizens?”

Reuters reported on February 5 that some 600 people have been detained in Istanbul and Ankara since January 4 when the Bogazici protests and Bogazici-inspired protests began. Most have been released, despite repeated statements from officials that the protesters are terrorists.

The demonstrations in defiance of the authorities have highlighted a critical difficulty Erdogan must overcome if he wants to extend his rule into a third decade—disaffected young ‘Generation Z’ Turks (people born between the mid-1990s and early 2010s make up 39% of Turkey’s population of 82mn) who think he has nothing to offer and have few memories of life before he took power in 2003.

Erdogan, warning that there would be no repeat of the nationwide ‘Gezi’ protests in 2013, when hundreds of thousands of people marched in Istanbul and elsewhere in the biggest popular challenge to his authority, complained in parliament that the youth have no recollection of how much worse things were in Turkey before he took charge.

“Those who did not live in the old Turkey, our youth who didn’t suffer those troubles... we are struggling to tell them the importance of Turkey’s gains,” Erdogan told lawmakers, claiming huge advances in health and infrastructure.

Kemal Ozkiraz, founder and chairman of Avrasya polling company, told Reuters that the government was losing touch with the youth and that as things stood only around a third of some five million new eligible voters would support the AKP in the next elections. Ozkiraz cited a survey conducted in January based on face-to-face interviews with more than 5,000 people in 25 cities across Turkey. “While the youth expect promises, hopes and dreams about the future, the AKP is promising them the past,” he said.

In true populist fashion, Erdogan and his cohort have succeeded in polarising Turkey and, come what may, Turkey’s leader is likely guaranteed the support of from a quarter to a third of Turks, but winning over much of the youth seems an impossible task given the wretched state of the Turkish economy and the resentment many young people feel amid the regime’s curbing of freedom of speech.

Consultancy Istanbul Economics Research estimates youth unemployment is running at 29% in Turkey, with 37.9% of new graduates unemployed and the likelihood of that proportion going up even further.

On February 4, Behrem Evlice, a fourth-year political science student, was quoted by the Guardian. He said: “We are so angry right now, and it’s not just Bogazici students, it’s students and young people all over Turkey. [The state] has attacked us with the police and violence. They are smearing us with these labels when all we want is a say in how our university is run. Ultimately though there is an economic crisis in Turkey and they know they are going to lose votes … they are just trying to divide people.”

INTERVIEW: Kazakh gold miner AltynGold on a roll
9 hours ago
Russian retail investors return to bank deposits as interest rates rise
15 hours ago
Ready for war at any time in southern Armenia
2 days ago
Montenegro’s dysfunctional ruling coalition limps on
2 days ago
Gazprom says it will use windfall gas crisis cash to up boost capex
3 days ago