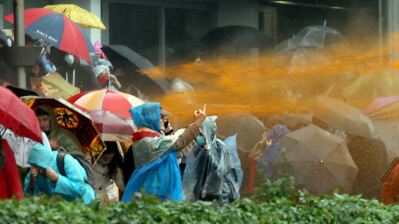 Protesters defied water cannon, paintball pellets, the OMON and rain to demonstrate against Lukashenko in their now regular rally on Sunday.
By Ben Aris in Berlin October 12, 2020

A cordon of security officers was formed outside paddy wagons full of demonstrators that arrived at a detention centre in Minsk on the evening of October 11. The detainees were made to run the gauntlet. Officers on either side shouted abuse at them and beat them with truncheons as they ran past.

The now regular Sunday mass demonstration in Minsk went ahead as usual, but due to the rain and falling temperatures with the arrival of autumn the numbers were down from their usual 100,000-plus.

And as with each preceding week, the police became a little more brutal, hoping to break the spirits of the protesters.

A total of 586 people, including at least 40 journalists, were detained, mostly in Minsk but in other cities as well, according to human rights organisation Vyasna. That is double the number arrested the previous week.

Police in vans shot paintballs at people arriving for the demonstration in order to tag them for later identification and arrest.

Belarus has been rocked by protests since Alexander Lukashenko, in power since 1994, was declared the winner of the country’s August 9 presidential election amid allegations of widespread vote-rigging.

In the latest Minsk demonstration, black-clad security forces were seen hitting demonstrators and carrying them to small buses. Some were pinned to the ground by masked police, while others, injured with bandaged heads, could be seen sitting on the ground.

The demonstration comes a day after the 66-year-old Lukashenko met with opposition leaders imprisoned at a detention facility run by the country’s KGB security service, ostensibly to discuss plans for constitutional reforms.

A photo posted by Lukashenko's press service on the Telegram messenger app showed him sitting at an oval table with prisoners who included Viktor Babariko, a banker once seen as Lukashenko’s toughest rival in the August election, but who was prevented from running and was then jailed.