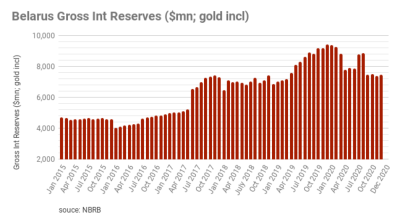 Belarusian residents withdrew $1.9bn in dollars from banks during 2020, with $1.4bn being withdrawn in August alone at the start of the mass protests following the disputed August 9 presidential election, the Ministry of Finance said in the first week of January.

Fearing a new economic crisis and appropriation of their hard currency savings, Belarusians flocked to ATMs to withdraw their savings as widespread street fighting with OMON riot police broke out across the country in the days after the election, which observers say was massively falsified to give incumbent President Alexander Lukashenko a landslide victory.

That left the financial authorities scrambling to shore up reserves in order to prevent a currency crisis. Russia offered some $1.5bn in debt relief and another $500mn in cash to shore up Belarus’ finances and avoid a default or crisis.

A general strike called by the opposition in October failed to happen and in the last quarter of 2020 the government managed to build up its reserves again, partly by tapping domestic savings and issuing bonds on the local market.

Belarus' gold and foreign currency reserves totalled a record high of $7,468.5mn as of January 1, 2021, according to the preliminary data of the National Bank of the Republic of Belarus. Of that amount $3,041mn was monetary gold. Overall, the country's international reserve assets decreased by $1.9bn (or 20.5%) in 2020.

According to the country's main monetary guidelines for 2020, the volume of international reserve assets was expected to make up at least $7.3bn on January 1, 2021.

The decrease in the volume of the gold and foreign exchange reserves in 2020 was mainly due to the planned repayment by the government and the National Bank of Belarus of foreign and domestic obligations in foreign currency amounting to about $3.9bn, including $227mn in December and also due to the sale of foreign currency by the National Bank via the Belarusian Currency Stock Exchange.

The debt repayments and currency withdrawals were counterbalanced by government bond issues. The Belarusian economy remains heavily dollarised, a pool of money that the authorities can tap. The government issued a total of BYN300mn ($116mn) local currency-denominated and $464.44mn dollar-denominated bonds in 2020, according to Belarus’ Ministry of Finance, BelTA reported on January 7.

As much as $225.56mn worth of registered bonds were sold via the trade system of OAO Belarusian Currency and Stock Exchange.

The Belarusian Currency and Stock Exchange has been closed for the long Orthodox holiday period but will resume trading on January 11.

The government has been offering bonds with a coupon rate of 4.5% per annum, with the redemption date set at February 10, 2028.

Under new rules the government is also intending to tap the hard currency savings of the population through a retail bond. Ordinary people will be able to buy bearer bonds denominated in US dollars this year in Belarusbank's and Belagroprombank's branches.

The government also tapped international markets, but was limited to borrowing from Russia and the Russia-lead credit agencies after it was effectively isolated by Western sanctions.

As of December 1, 2020 Belarus' external state debt totalled $18.2bn, $1bn or 5.9% up since the beginning of the year (taking into account differences in currency exchange rates), BelTA reports.

The Belarusian Finance Ministry does not see any problems with repaying the state debt in 2021, Finance Minister Yuri Seliverstov told journalists on December 28, BelTA reported.

“We are set to raise some one billion [US dollars in 2021]: $500mn from the Russian Federation and another $500mn on the foreign and domestic markets. We will also use the residual budget for the repayment [of the state debt],” said Seliverstov.

“This will be enough to fulfil all our obligations. We see no problem here,” said the minister.

“We have borrowed resources this year through eurobonds, from the EFSD and on the Moscow Financial Exchange. We are currently working with our Russian colleagues,” the minister said, adding that the Russian government had approved the agreement to grant Belarus a $1bn loan in December. According to him, $500mn will be received by the end of this year and another $500mn in 2021.

“Right now there is no clarity as to whether we will be able to borrow on the European market or the Moscow Financial Exchange in the standard mode. Amid the pandemic no one has such clarity. In March-April the cost of borrowing rose sharply, and not only in our country, but on the market in general,” Seliverstov said.

Putin, Lukashenko meet for six hours of intensive talks in Sochi
Belarus retail sales down by 0.9% in January
Abuse and hate speech against LGBTI people rises across Europe and Central Asia

Modest recovery in prices of new apartments in Montenegro in 4Q20

Apartment prices increased 15% q/q in 4Q20 but were still down by 11.3% y/y in emerging Europe's worst hit economy by the coronacrisis.

Romania’s public debt-to-GDP ratio up 12.4pp y/y to 47.7% at end-2020
9 hours ago
Grey economy almost a third of GDP in Bosnia, Montenegro and Serbia
1 day ago
Belarus retail sales down by 0.9% in January
1 day ago
Consumer prices increased by 1.1% in Serbia in January
2 days ago
Modest recovery in prices of new apartments in Montenegro in 4Q20
3 days ago